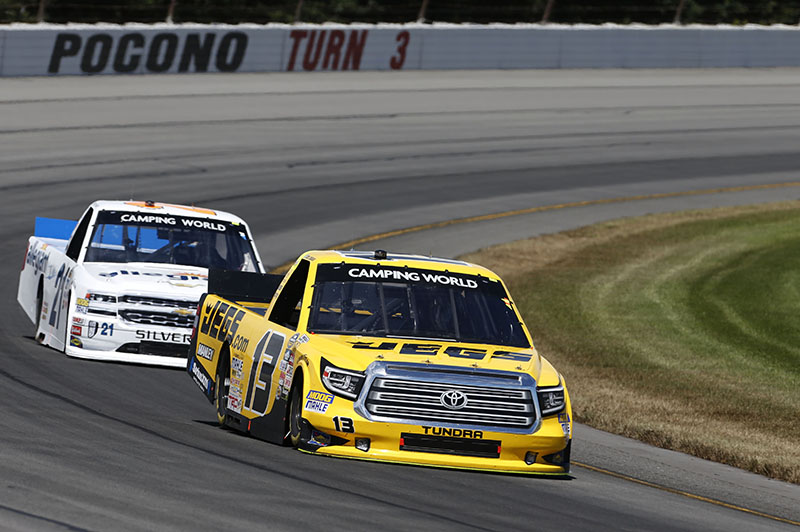 Pocono Raceway’s nickname is the “Tricky Triangle,” but in Saturday’s Overtons 150 for the NASCAR Camping World Truck Series, Cody Coughlin didn’t find the 2.5-mile Pennsylvania triangle to be all that tricky.  The 21 year-old scored his first career top 10 with an eighth-place finish.

Coughlin’s day began with him narrowly missing the second round of qualifying. He quickly worked his way through the field from his 13th-place starting position.

The Delaware, Ohio native raced in the top 10 for much of the 60-lap event in his No. 13 JEGS.com/RIDE TV Toyota Tundra for ThorSport Racing before eventually finishing a strong eighth-place.

“I think this was a really good day,” said Coughlin.  “We’ve been running well. We just haven’t been finishing there. It’s really nice to finish where we should have, so I’m really happy with it.”

After finishing 11th on the dirt at Eldora Speedway (OH) last race and then eighth on Saturday, Coughlin said he thinks he finally has positive momentum on his side.

“We’ve been needing our luck to turn around and it appears that is finally happening. I’m really happy about today’s run. Michael (Shelton, crew chief), Rich (Lushes, truck chief) and everybody on this team have been working so hard. I’m glad that I could finally reward them all with a top 10 finish. Hopefully we’ll keep it going next race at Michigan and continue to make Duke and Rhonda Thorson proud.”

Now Coughlin and his ThorSport Racing team will have a couple of weeks off before the next NASCAR Camping World Truck Series race. Coughlin’s next race will be on Saturday, August 12th at the two-mile D-shaped oval of Michigan International Speedway in the Irish Hills of Brooklyn, Michigan.