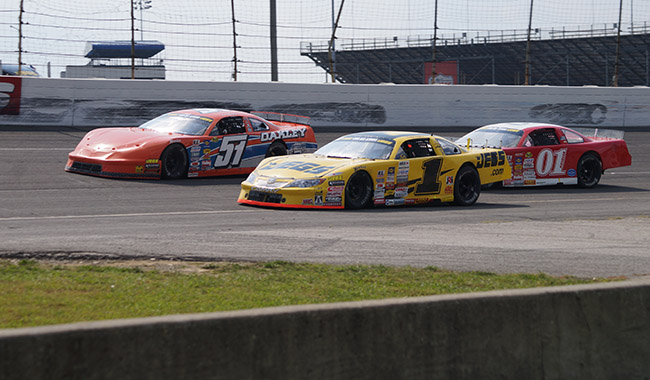 The title of Cody Coughlin’s “Quest for Duel Championships” could have switched to a “Voyage Across North America” this past weekend.  After leading his first laps in NASCAR Camping World Truck Series competition at New Hampshire Motor Speedway on Saturday, Coughlin dashed over to Indianapolis, IN to compete in two more races in in the “Fall Brawl” at Lucas Oil Raceway with the Champion Racing Association.

Consistency was the subplot of the day as the Joe Gibbs Development driver score two, top-five finishes in Late Model competition.

Coughlin first had 100 laps in his Pro Late Model with the JEGS/CRA All-Stars Tour on Sunday, followed by a 100-lap feature for the ARCA/CRA Super Series in a Super Late Model-style car.

The Ohio native was forced to start at the rear of the field in the Super Late Model race due to an incident in qualifying the prior day.  In fact, Coughlin had to drive his Pro Late Model in the CRA Super Series race due to the damage with his Super Late Model.  Despite the horsepower disadvantage, Coughlin battled his way through the field to a fifth place finish with a valiant effort.

Due to the fact that Coughlin missed JEGS/CRA All-Stars Tour qualifying on Saturday while en route to Indianapolis from New Hampshire, the 20 year-old had to start in the rear of that field as well.  Coughlin drove to a strong second place finish in the Pro Late Model feature.

With the fine finishes, Coughlin remains the point leader in each of the CRA Late Model touring series.’

“My guys were awesome all weekend,” Coughlin said.  “The weekend didn’t go how we wanted it to, but we still got two really good finishes considering the circumstances.  I just can’t thank my guys enough for working so hard all weekend, especially when I was in New Hampshire with the truck.  Jack (Smith, crew chief), Kevin (Hamlin, crew chief), Scott (Wimmer, spotter), Dave (Holt, crew member), and Jon (Ziti, crew member) all worked so hard.  We have one race left for each division so hopefully their hard work will be rewarded.

“My parents (Di and John) have helped me make this such a spectacular year and Kennedi (sister) has been a big support for me though it all.  She travelled all the way to New Hampshire to watch me race and I couldn’t be more appreciative.  God has blessed me for sure.”