Coughlin Battles to Another Top-15 Finish in Hawkeye State 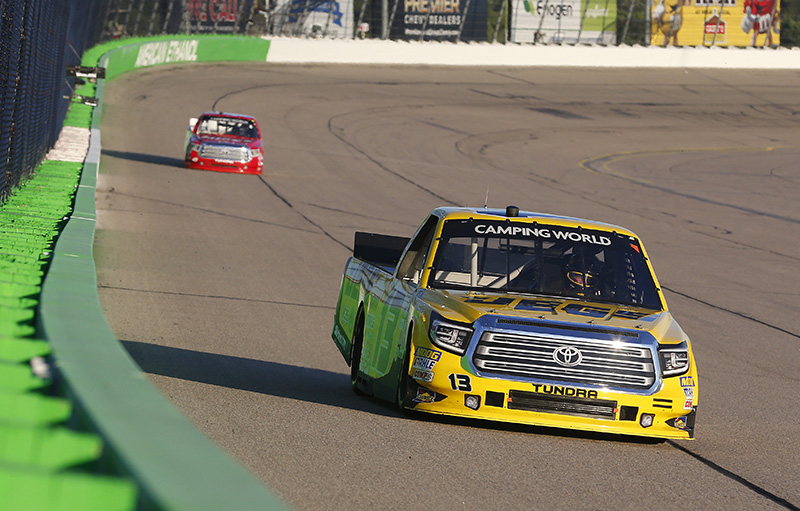 Cody Coughlin picked up another top 15 finish on Friday night in the M&M’s 200 at Iowa Speedway, his first start at the 7/8-mile oval. Coughlin started 15th and finished 12th in his JEGS.com/RIDE TV Toyota Tundra for ThorSport Racing.

The Delaware, Ohio native raced in the top 10 for much of Friday’s race before having to pit for an undiagnosed vibration.  The 21-year-old driver said over the radio that he wasn’t sure what was vibrating, but that it was bad enough that he needed to pit.

Coughlin went two laps down after the pit stop, but battled back to finish 12th, just one lap down with a truck that was still in one piece.

“This was a challenging day,” Coughlin said.  “We were really strong in the first practice session in the morning. In final practice we struggled, then we ran pretty well for much of the race before that vibration came. I don’t know what it was, but I wanted to make sure we didn’t wreck the truck so I felt it was the right move. In the end, a 12th-place finish isn’t exactly what we’re looking for, but the truck is in one piece so I’ll take that and move onto Kentucky.”

Coughlin also received some damage to the left-front fender after being involved in an incident in turn two midway through the race. Coughlin was an innocent bystander in the incident. He and his team continued to battle hard after receiving the damage, pitting once to repair the damage.

Coughlin made his NASCAR Camping World Truck Series debut at the Kentucky Speedway two seasons ago and he’s looking forward to heading back.

“I liked Kentucky when I raced there. I didn’t get to make many laps that day because practice and qualifying were rained out, but I enjoyed the track. I like the mile and a half tracks. They’re fast and fun. Hopefully we’ll get a good finish in Kentucky because my crew deserve a good finish. I can’t thank them enough for their hard work each and every week.”

Coughlin’s next race will be held on Thursday, July 6th at the Kentucky Speedway in the Buckle Up in Your Truck 225, live on FOX Sports 1.