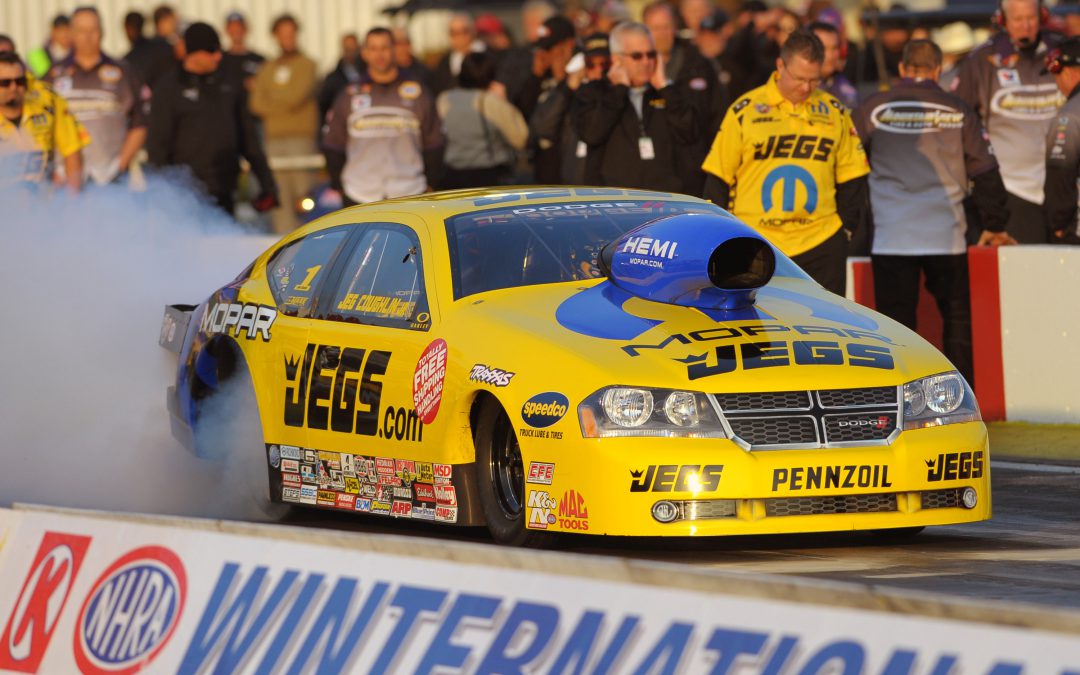 Coughlin, who secured his fifth Pro Stock title at this track last November, had a best lap of 6.531 seconds at 211.96 mph. He'll square off against No. 9 qualifier Rodger Brogdon, whose top pass was 6.541 seconds at 211.79 mph, in the first round of eliminations on Sunday.

"Obviously, you always like to throw some good numbers up on the board,” Coughlin said. "You want to kick off game day in that fashion. We've been there and done it and look forward to tomorrow."

Coughlin's start to the 2014 campaign hasn't exactly gone as planned for the JEGS team, as Coughlin struggled with the car in the second and fourth qualifying sessions. His pass of 6.541 seconds at 212.39 mph was third-quickest in Q1, but then he had to do a masterful job of driving to get the Avenger down the track in Q2.

"Our two runs where we weren't too aggressive we went down the racetrack really well,” Coughlin said. "That last run, we felt like we wouldn't have any issues going down the racetrack, and we were looking to pick up in the pack a little bit and have a good game day setup for tomorrow.

"We're scratching our head a little bit now, but we've got a good brain trust here that will sort this out. And we've got another car (J&J Racing teammate Allen Johnson) to peek off of for data, so I'm not too worried.”

Part of that brain trust includes Adam Hornberger, who is serving as co-crew chief with Mark Ingersoll for the first time, and Coughlin is confident the car will be good for Sunday's eliminations.

"We're batting ,500 here, so that part's not real exciting,” Coughlin said. "We'll sit in with the crew chiefs and see what they've got up their sleeve. I know they're more than capable of making this car go down the racetrack, so it's just a matter of getting the right focus.”