Coughlin bullish on chances in NHRA’s Countdown to the Championship 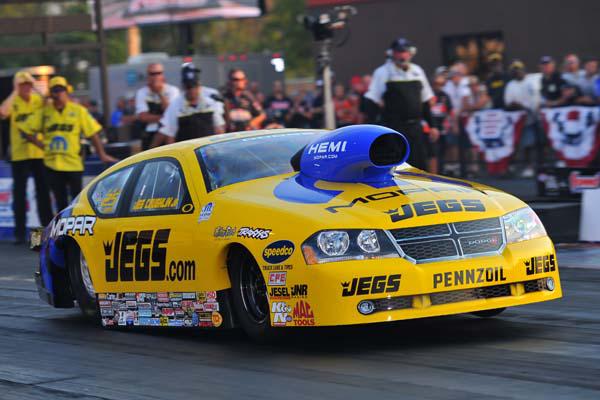 CHARLOTTE (Sept. 11) — In the five years that NHRA has decided its champions through a playoff-style system, Jeg Coughlin Jr. has emerged on top of the Pro Stock heap twice, in 2007 and 2009. Including the crowns he also earned in 2000 and 2002, Coughlin has won through shear dominance and been pushed to the bitter end only to slip through victorious by the slenderest of margins.

In 2012, Coughlin will need to reinvent himself once again as he enters the Countdown to the Championship, which begins this weekend at zMax Dragway, in the 10th and final spot in the field of eligible drivers. He's 110 points behind leader Allen Johnson, which is the equivalent of five and a half rounds of action, with six races and a potential of 24 rounds left on the table.

"We're one of the chosen few that have a chance and we're very, very excited about that," Coughlin said. "We have an extremely large mountain to climb, both in the points and with our growing program, but I truly think we're better than what we've shown and if we can race to our capabilities down the stretch, then we'll have a chance."

Coughlin debuted his JEGS.com/Mopar Dodge Avenger at the start of the season after putting together his own in-house team with motors from JNR Racing Engines, a similar upstart operation that JEGS co-owns with Nick Ferri and Roy Simmons.

The group has experienced all the usual growing pains, but Coughlin and crew still accomplished their first goal of making the playoffs with a steady, if not spectacular regular season highlighted by a runner-up result in Pomona, Calif.

"We've come quite a long way since that first race," Coughlin said. "Especially here lately. The car's definitely getting better, we're figuring out the motors and my driving has been good. If we can continue to combine all three of those factors and do our best to eliminate all mistakes in the pit and on the track, then we might surprise some folks."

Prior to the points resetting for the Countdown, Coughlin was 830 points behind Johnson. In one swipe, 720 points of that deficit has been erased.

"It's a rebirth," Coughlin said. "And it allows us to refocus on our ultimate goal of winning the 2012 Full Throttle championship. It won't be easy and we're probably not on par with the top teams just yet but when you see Dave Connolly go into the U.S. Nationals last weekend and win the race with a bunch of steady runs and some awesome driving, it reminds you that it's possible."