Coughlin Captures Eye of Tiger for Podium Finish Outside of Indy 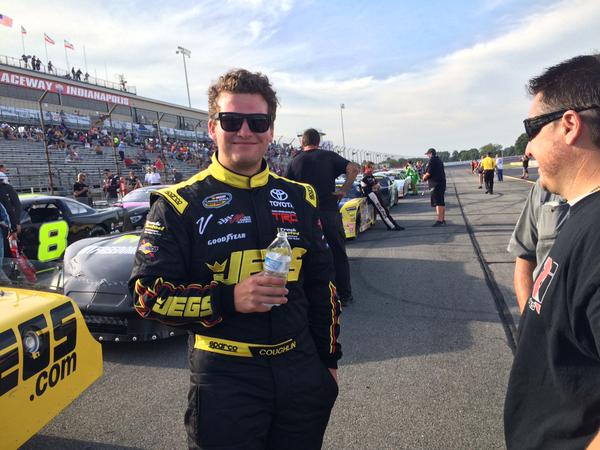 His stellar performance placed him on the podium in the Circle City 100 outside of Indianapolis, IN, but the story of how he got there is what impressed all.  Coughlin’s number-one Team JEGS Toyota Camry had a cut tire midway through the race.  He was forced to pit.  After that, Coughlin dazzled fans, at times going three-wide, to march his way back to the front of the field.

"It's unfortunate that we cut a tire down, but we battled back and finished third," said the 19-year-old Coughlin.  "We definitely have nothing to hang our heads about.  That felt good coming from the back to the front with such a great car.”

Coughlin qualified fourth, but started seventh by virtue of the ten-position invert.  He quickly made his way into the top five and rode around in fourth for much of the first half of the race.

But then trouble struck right at the midway point of the race.  One driver crashed hard in turn two, which resulted in a red flag.

When Coughlin started rolling again under yellow he radioed to his crew chief Nick Easton that he felt like he had a left-front tire going flat.

Easton told Coughlin to come to pit road change the tire.  When Coughlin got to the pit area the tire was almost completely off the rim.

Easton, Kevin Hamlin and Dave Holt got the tire changed fast and kept Coughlin from losing a lap.

Then the charge was on.  Coughlin restarted in the 18th position and quickly started making moves with assistance of his spotter Scott Wimmer.   He went three-wide in the middle in turn three on the restart, then went to the outside and made it three-wide down the front-stretch.

When all was said and done, Coughlin managed to battle back to the top five with ten laps to go.  The caution flag flew with five laps to go, which gave Coughlin another chance to fight for the win.

Coughlin grabbed two spots on the restart and moved into third before another caution came out.  He lined up on the inside, right behind the leader.

While he was unable to gain any more spots, the charge back to third had Coughlin and his race team in a good mood at the end of 100 tough laps.

"I think we were the most impressive car here," said Coughlin.  "It was definitely fun, but the fun part is knowing we had a shot to win and show off our God-given talent.

Cody Coughlin is now scheduled to race at Auto City Speedway in Michigan on Saturday, August 8th.  The race is with the CRA / JEGS All Stars Tour, the series in which he was champion of in 2013.