Coughlin Cleans Up on JEGS/CRA Hardware at Winchester 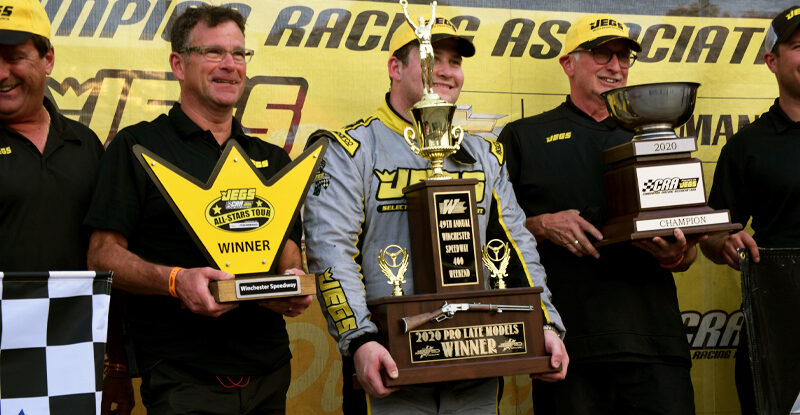 At night’s end, Cody Coughlin was the last man standing, and cleaned up all the hardware in the process.  Coughlin won the 100-lap feature as well as the series championship with his performance.

Coughlin would be the only one of the four Championship Chase contenders to even make it past the halfway mark of the event, but that did not deter him from gunning for a Winchester rifle trophy.  Instead, he stayed full steam ahead, running down Stephen Nasse in the closing laps to take the win.

Even with the misfortune for the other title hopefuls, Josh Brock, Travis Braden and Charlie Keeven, Coughlin felt he needed a car good enough to win the race to also win the title.

“It’s really special because of the way this particular format works,” Coughlin told Speed51. “Having to perform this day is really special.  To win the championship this way, it almost forces you to have to win.

“I feel bad for our fellow championship competitors that had some hard luck.  I thought we had a solid chance at it even if they hadn’t fallen out.  I think we earned it.  I’m proud of everybody.”

While Nasse faded in the closing laps due to an electrical issue, Coughlin pressed forward.  Coughlin took the lead for good on lap 91, pulling away to win by nearly four seconds afterwards.

“I didn’t think we were going to catch him,” said Coughlin.  I even said to myself, unless we got a caution, I didn’t think we’d catch him.  He was out pretty far.  We were able to keep our pace up, and it worked out.”

“We had an alternator, battery issue,” explained Nasse.  “The gauges went black on me, and there’s not much you can do at that point.  It happened, I believe, around lap 60.  Once you have that problem, there’s no coming back from it.  You just cut off all your switches off and all your fans, hope for the best.

“We were lacking on power there at the end, there was no holding off the 1 car, he was too fast.  When he got to me, I let him go.”

While Nasse’s downfall was mechanical, the trio of championship hopefuls who fell by the wayside early did so after on-track incidents.  The first to go was Josh Brock, after contact with Albert Francis in turns three and four on lap seven.

“I just got drove through,” said Brock.  “It was too early in the race.  I should still be out there fighting for a championship, but I’ll keep it that way and not say anything too crazy.

“We still had a great year, won Anderson, won Bristol.  We had a great year.  We’ve still got two hard days to fight here at Winchester and a good Super in the trailer.  It sucks, but what can you do?  They’re kids.  It couldn’t have been more than 10 laps in.  There’s a lot of patience that can be learned.”

Keeven would be next to fall out of the race, after a collision with Bobby Reuse on lap 14.

“Coming off of three and four, I tapped him into the outside wall, put him up there.  I passed him, but then he tapped me in one and two.  It’s just racing.

“I’m happy I was able to make it [into the Championship Chase], but I’m pretty disappointed how it ended.”

Lastly, a hard hit in turns one and two ended Braden’s night after 33 laps.  While uncertain due to the significant damage to the car, Braden believes a cut tire was his downfall.

“I’m not really sure what happened.  It looks like we cut a tire, but we hit so darn hard that everything’s broke.  I don’t really know what happened first, but there’s a big hole in the tire, so we believe that’s what happened.”

Limited tickets are still available for Saturday and Sunday at Winchester Speedway.  Click here to order your tickets now and witness a crown jewel event in the Super Late Model world.