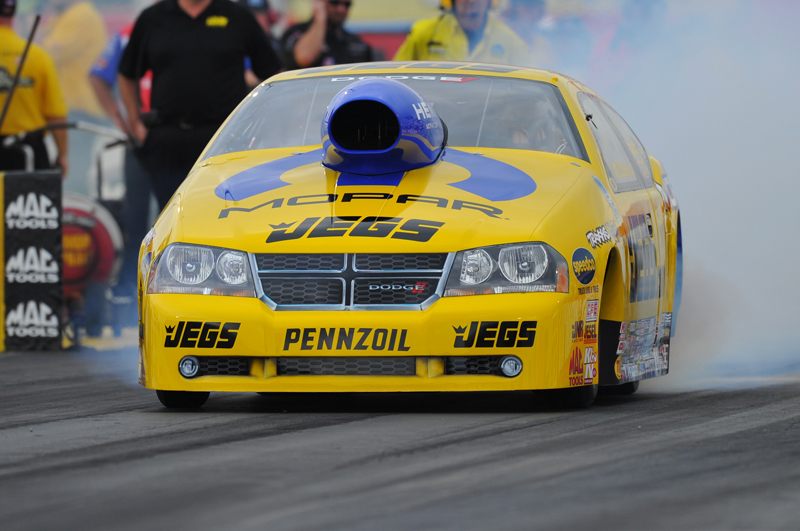 INDIANAPOLIS (Sept. 9) – Even though the 58th annual Mac Tools U.S. Nationals stretched into a second weekend, Jeg Coughlin Jr. walked away with a reward that was worth the wait.

In his first year driving the JEGS.com/Mopar Dodge Avenger and building his own Pro Stock engines through JNR Racing, Coughlin locked up a spot in the Countdown to the Championship, the NHRA’s version of the playoffs.

“The drama of the getting into the Countdown was at an all-time high in all the pro classes,” Coughlin said. “Pro Stock was right at the top of the list with six guys vying for the last four spots.

“It feels good to get into the Top 10. We think we’ve got a better team and a better car than we’ve showed all year. We’ve gotten our act together lately and the car has been much more drivable.”

Coughlin will start the Countdown in the No. 10 spot, 110 points out of the lead (Coughlin started the weekend 830 out of first). He said the team is ready for whatever the playoffs throws at them.

“The format is unpredictable,” said Coughlin, who scored two of his Pro Stock championships in the playoff era. “We’ve taken advantage of it coming up through the field and we’ve started at the top and not done so well with it.

“We’re going to Charlotte with a much cleaner slate than at any point since we went to Phoenix second in the points. That’s exciting.”

On Sunday, Coughlin was paired against Rodger Brogdon in the first round of eliminations. Brogdon got a big jump at the starting line and held on to win on a hole shot. Brogdon had a .028 second reaction time and ran a 6.636 second pass at 207.66 mph. Coughlin was off the line in .069 seconds and ran a 6.606 at 209.20 mph.

“We’re going to need a magic wand and a lot of good luck in the Countdown,” Coughlin said. “But I think we’ve worn out the other kind of luck we’ve had the rest of the year. I’m hoping it will come into play for us, and we’ll make a run at this championship.”

Coughlin reached the quarterfinals of Stock eliminator in the JEGS.com Dodge Challenger Drag Pak. In that race, he went red by -.005 seconds against Jeff Teuton.

“We had a great run,” Coughlin said. “When you get that close to winning you can get over anxious. I was -.005 too quick and that was -.005 too much. I felt great, the car was running great. I was running a good friend and it looked like we were going to have a great drag race.

“Now he’s going to the semis and we’ll cheer him on.”

Up next for Coughlin and JEGS/Mopar Avenger is the O’Reilly Auto Parts Nationals from Sept. 14-16 at zMax Dragway in Charlotte.