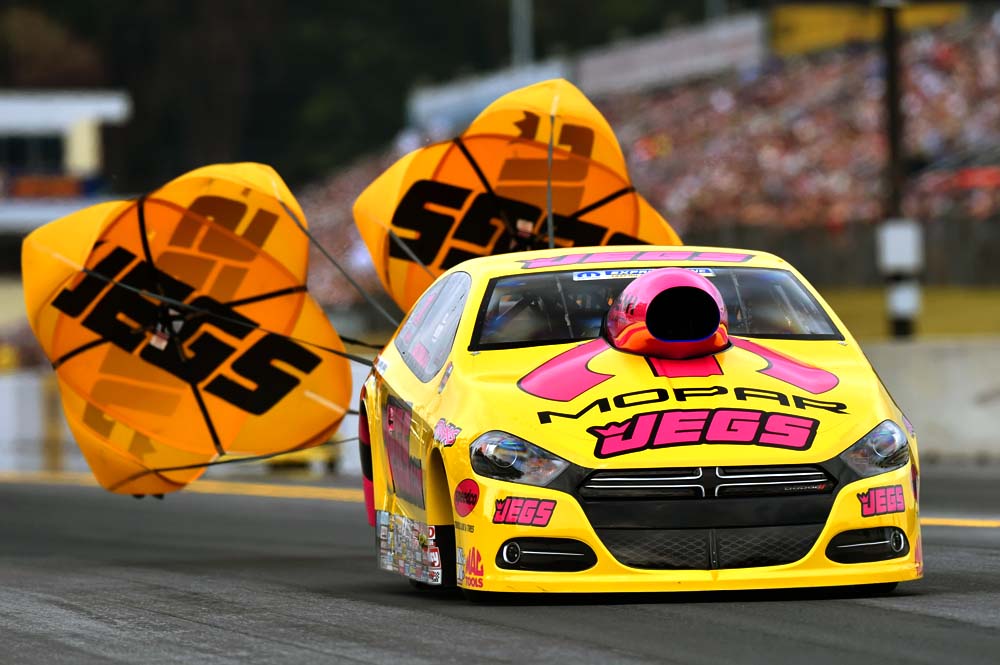 READING, Pa. (Oct. 5) — Entering this weekend's 30th annual NHRA Nationals at Maple Grove Raceway, five-time and defending Pro Stock champion Jeg Coughlin Jr. knew he needed to be near-perfect to continue his title defense. Unfortunately, the decorated driver from Delaware, Ohio, was beaten in the opening round of eliminations, virtually eliminating him from championship contention this year.

"It's not a reality at this point to think we can defend the title, at least with this JEGS.com Dodge Dart," said Coughlin, who pending the outcome of this race will be at least seven rounds off the lead with just two events left on the schedule. "Allen (Johnson, teammate) still has a chance as it stands right now with 11 rounds left to run, so we'll pull for him to keep the championship trophy with Mopar for a third year in a row.

"This is not the way we wanted to debut our 'Breast Cancer Awareness' hot rod. Last year we debuted another pink car and took it through four great rounds and wound up winning this race, which really put a stamp on our championship charge. That's what we were hoping to do again this year but it didn't happen. We were spoiled by our success."

Coughlin certainly gave it his all against first-round foe Greg Anderson, reacting to the Christmas Tree in .010-second, but as it turns out Anderson was even better, pulling off an otherworldly perfect .000 launch. At the other end, it was Anderson taking the win light with a 6.501 at 213.60 mph to Coughlin's 6.545 212.23 mph.

"It's perfect conditions out there for building good horsepower and I felt great in the car," Coughlin said. "We had a .010 light, which was right about what I expected, but lo and behold Greg was a perfect .000. If Lady Luck was on our side he would have been a thousandth quicker and been pink (fouled out).

"No question we should have run a 6.46, 6.47, and if we had it would have been a different outcome, but it just fell flat on its face at the launch. I started going through the gears and it drifted on me a bit, so I was concentrating on getting it back in the groove. As I got to fourth gear I saw him nose out on us. That wasn't a good sign.

"It's disappointing. We made three good runs in qualifying but the fourth one was a touch off and we got dropped back on the ladder, which ended up really costing us because we had a tougher first-round matchup with Greg. Last year we got more than our share of wins in these close races but today wasn't our time."

Coughlin and the rest of the NHRA tour takes a much-needed break before resuming action with the 14th annual NHRA Toyota Nationals, Oct. 31-Nov. 2, at The Strip at Las Vegas Motor Speedway.

"We'll go out and try to win these last two races," Coughlin said. "That's all we can do at this point. We'll debrief, regroup for Vegas, and go out West in a few weeks and get after it in Vegas and Pomona (Calif.)."