Coughlin draws to within four points of playoff field 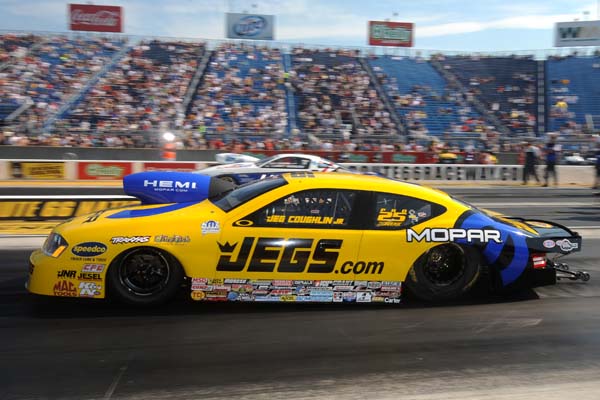 NORWALK, Ohio (July 8) — It doesn’t happen often but even world renowned drag racer Jeg Coughlin Jr. leaves the starting line before the green light shines and gets disqualified. That was the unfortunate outcome Sunday in the quarterfinal round of the sixth annual NHRA Nationals in Norwalk where the four-time Pro Stock champion pushed the Christmas Tree a little too far and fouled out by -.013 seconds, handing the win to reigning series champion Jason Line.

“Every once in awhile this happens and it never feels good,” Coughlin said. “I didn’t think I hit that close to the yellow light so I must have just flat-out anticipated it too much. I knew I needed a good light and after having a .025 in the first round I felt there was some room for improvement but obviously I missed it.”

Adding to the sting of the automatic DQ is the fact he ran a great lap against Line, who had qualified a lofty second on the starting grid. Completing his run despite the red-light start, Coughlin carded a 6.656 at 207.34 mph in his JEGS.com /Mopar Dodge Avenger to Line’s 6.650 at 207.43 mph.

“I think we have the best racecar that we’ve had all year,” Coughlin said. “We’ve gained a lot of ground since Eddie (Guarnaccia, crew chief) joined the team a few races back and the confidence is returning to the JEGS.com pit.”

Coughlin qualified 10th at this event with a 6.718 at 206.07 mph. He then made a big jump in performance in Round 1 when he beat Chicago winner Erica Enders with a stout 6.649 at 207.78 mph, the fourth best elapsed time of the entire session. Times were drastically better across the board Sunday thanks in large part to more agreeable temperatures.

“We look at where we are in relation to the other cars after every session,” Coughlin said. “We definitely held our own this weekend regardless of the conditions and that’s a real tip of the hat to the JEGS.com crew because they kept up with the heat and a deteriorating track surface all race long. It got better today and we picked up so everything was right on schedule.”

This weekend’s second-round finish lifted Coughlin to within four points of the Full Throttle top 10, a margin that can be made up with qualifying points alone. Only the top 10 drivers following the Indy race on Labor Day weekend are eligible to win the 2012 championship so Coughlin has his sights set on making the cut.

“It couldn’t be a better time for our program to be coming together,” Coughlin said. “We’ve got the Western Swing coming up and we’d like to be firmly in the top 10 by the end of those three races. Then there are just two more before the Countdown starts.

“The Mopar Mile-High NHRA Nationals in Denver are first up and being a part of the Mopar family makes it a very big race for us. We’ll go there and test this week and make sure everything is set up for a big weekend when the real race starts.”