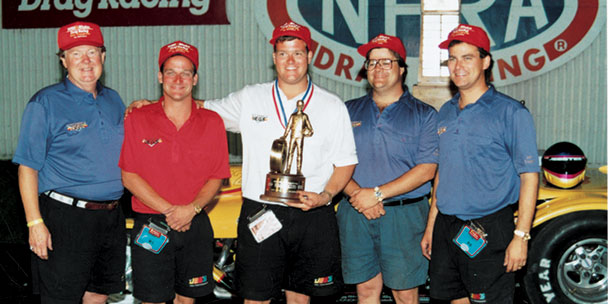 INDIANAPOLIS (Aug. 28) — Indianapolis is a magic place for racers from all over the world, and for many, simply getting to compete at historic Lucas Oil Raceway is a dream come true.

But to win at Indy? That's beyond the wildest dreams for most straight-liners. For the Coughlin family, however, the dream of winning at Indianapolis has become reality – many times over.

The three JEGS.com pro drivers competing at this year's event – Jeg Coughlin Jr., Troy Coughlin Sr. and Troy Coughlin Jr. – have each won at Indy at least twice and have combined to win at Indianapolis 13 times. And while they certainly enjoy their own accomplishments, they also relish in their family's success.

"I go back to 1991 watching and helping my brother Troy win in Super Gas," Jeg said. "He was the first Coughlin to win Indy and bring home that U.S. Nationals Wally, and yeah, that was a big deal for all of us. He had an extremely fast, new-era race car that had a real 'wow' factor for everyone. It was fast all weekend long and he got the win."

Troy Sr. has three wins at Indy, but some of his warmest memories are getting to see son Troy Jr. win the U.S. Nationals in Super Gas in 2014 and Super Comp in 2010.

"Last year, watching T.J. win the Super Gas trophy 25 years after I did was the best ever," Troy Sr. said. "I had just finished making a run in my Pro Mod car and I was packing my 'chutes. I heard on the PA that Super Gas was up, so I ran over to watch on the TV monitors at the top end of the track. When it showed him going through the finish line and the cameras zoomed in on him because he had won, I bet I jumped 10 feet off the ground.

"All the NHRA guys were congratulating me and I was going crazy. T.J. rolls around the corner and gets out of his car. He's completely nonchalant about everything, which is just how he is, and I'm like, 'Son, you just won the 60th anniversary U.S. Nationals!' And he says, 'Yeah, pretty cool, huh?'"

It is pretty cool for Troy Jr., of course, and he'll cherish his two U.S. Nationals trophies, but he'll also carry the memories of his uncle Mike Coughlin winning in the old Pro Stock Truck class there in 1999.

"I was too young to be on the starting line, so I was at the fence in 1999 when Uncle Mike beat Scott Perrin the Pro Stock Truck final," Troy Jr. said. "He had a .401 light in the final, and when he left the Tree I knew it was over. I was screaming as he went down the track.

"The next year Uncle Jeg won Pro Stock from the 16th qualifying spot, which had never been done before. That was incredible because no one gave him a chance at the start of the day. Then in 2009 I was at the finish-line shutdown area when Uncle Jeg won it again. It was cool to be one of the first people to congratulate him."

Jeg Coughlin, the five-time Pro Stock world champion, has won at Indy eight times, starting with winning the Super Gas divisional and national events in 1992. He also has three Pro Stock titles in the U.S. Nationals.

"My win in '92 will be one I'll always remember quite vividly," Jeg said "It was the year after Troy won, so we were trying to keep the S/G title in the family. There were lots of delays and the final went down late, late on Monday night. I had Sherman Adcock in the final, who needs no introduction of course, and there was this haze settling in over the track. When I went through the scoreboards and turned on the win light, it glowed in that haze. I still get goosebumps thinking about it right now.

"I knew right then that no matter what I accomplished for the rest of my career, I would always be able to say I won Indy."

But he would win Indy again, the first in 2000. Jeg qualified No. 16 for the U.S. Nationals that year, but that wouldn't stop him on race day.

"Winning from the No. 16 spot was crazy," said Jeg, who remains the only pro driver to win from all 16 qualifying spots. "We almost got bumped Sunday because after I'd made my last qualifying run there were still guys behind me that could have put us out. We were struggling, but Dad and Dick Maskin went over that car from bumper to bumper Sunday night and I went out there and started taking them down. We came to life at the exact right time."

Another great Indy memory for Jeg was winning the Hemi Shootout one year.

"I showed up having never driven that car and we somehow made it through to the finals," Jeg said. "Once again, the schedule was running late, and by the time we got to the final against the storied California Car Duster Car of Jim DeFrank and Rick Houser, they had to run us in between Funny Car and Top Fuel on Friday evening under the lights.

"I remember they had to part this sea of people and cars to get us up there, and I looked around and saw every nitro driver and crew chief hanging around the starting line. The stands were absolutely packed and the cheers were deafening. To pull that off was so cool."

Older brother Troy Sr. has pulled off three Indy wins: the Super Comp divisional race in 1991, the U.S. Nationals in Super Gas in 1991, and the Super Gas divisional in 1993.

"Winning there in 1991, I remember the late, great Leo Taugher coming over and interviewing me and I was thinking I had really accomplished something special for that to happen," Troy Sr. said. "Sends chills up my spine right now just talking about it. That was the first big race any of us boys had ever won and it was just special. As a racer in one of the Super classes, it just doesn't get any bigger than that … winning the U.S. Nationals."

Son Troy experienced that feeling 19 years later in Super Comp, so he knows the feeling, too.

"I've been lucky enough to win it twice, and it's pretty surreal," Troy Jr. said. "It's Indy. It takes so much to win that race. You have to keep your head in the game for so many days. It's a mental marathon more than anything else. Plus, you have to keep the crew in the game. It's exhausting.

"But I don't think there's a better feeling in the world than hoisting that trophy Monday evening. It's that top-of-the-world feeling."

Why? Because it's Indy.

"Indy's a place I've been going to twice a year all the way back to the diaper days with dad," Jeg said. "Being D-3 we have a divisional there every year and of course the U.S. Nationals. There's always been a certain mystic to that place for me, something that makes me dig a little deeper and try a little harder."