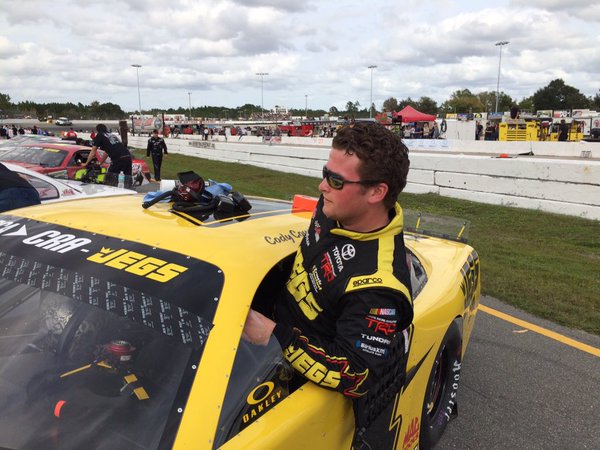 The 50th Florida Governor's Cup 200 at New Smyrna Speedway didn't go according to plan for Cody Coughlin and his Team JEGS crew.  Coughlin started 13th and made his way as high as eighth before the handling went away on his No. 1 Toyota Camry.

Coughlin and his team, led by Nick Easton, worked as hard as they could to improve the tight condition of the race car.  It seemed that the changes worked after pitting for a second time.

The 19-year-old driver started to make his way back through the field by using the outside to his advantage.

He made his way back into the top 10 before a multi-car crash in front of him left him with nowhere to go.  Coughlin was collected in the wreck and his race ended with 36 laps to go.

Coughlin walked away from the crash, but it ended his run in the the 200-lap race in the 20th position.

"It's just a shame, because it seemed for a while like we had a good race car," said Coughlin.  "Unfortunately we got caught up in a mess not of our doing.  We'll just get them the next time we head to the race track.

"I'm just thankful that the good Lord kept me safe, and that my parents, John and Di continue to let me chase my dream on the race track,” said the Joe Gibbs Racing development driver.  “I know my crew (Easton, Kevin Hamlin, Scott Wimmer and Dave Holt) will work hard to give me a winning race car the next time we head to the race track."

Coughlin is preparing for a 2016 season in which he will compete in a partial schedule on the NASCAR Camping World Truck Series with Kyle Busch Motorsports.

For more information on Cody Coughlin and Team JEGS, visit www.teamjegs.com and follow Cody on Twitter, @Cody_Coughlin. Follow Team JEGS on Twitter, @TeamJEGS, and "Like" JEGS Performance on Facebook.  Also be sure to check out Cody's new website, www.codycoughlin.com. Also be sure to check out all Cody related news on his new website, www.codycoughlin.com. Any other inquiries for Cody Coughlin can be sent to Bob Dillner via email at bd51sports@gmail.com.