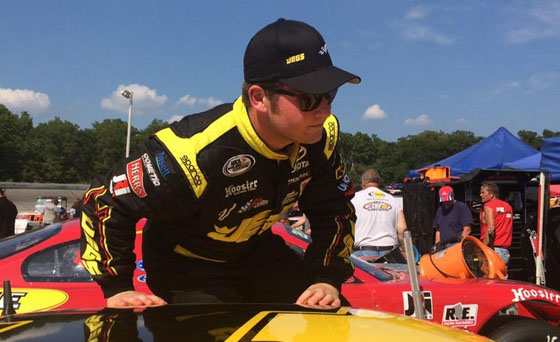 It was a hot Labor Day at Indiana's famed Winchester Speedway, but Cody Coughlin fought through the heat to score a third-place finish on the legendary 37-degrees of banking.   Coughlin started in the seventh spot and worked his way up to contend for the win in the ARCA/CRA Super Series Winchester 100.

The 19-year-old driver from Delaware, Ohio had one of the fastest race cars all weekend long at the World Stock Car Festival.  He was quick in every practice session and qualified in the top five on Sunday afternoon.

By virtue of a 10-position invert, Coughlin had to make his way forward from the seventh starting position.  He was on the bottom for the initial start of the race, but did well to keep his position even though the bottom is not the preferred place to be on restarts at Winchester.

Coughlin quickly started to show his speed as he worked his way towards the front.  Thanks to a couple well-timed cautions, Coughlin was able to eventually use the outside on the restarts to his advantage to move into the top-two.

For quite a few laps Coughlin chased down the leader.  In fact, he and the Christopher Bell ran all by themselves, virtually in their own zip code, as everyone else tried to reel them back in.

A late-race caution and the slower inside groove on a restart resulted in the the Joe Gibbs Racing development driver to slip back a couple spots, but he kept fighting hard and gained nearly all of them back.

In the end, Coughlin finished a hard-fought third in the blazing Indiana sun.

"It was a very exhausting day, but I'm extremely satisfied with our result," said Coughlin.  "It wasn't a win, but we had great speed and handling all weekend long."

Coughlin expressed a lot of pleasure in knowing that he and his JEGS.com team gathered a lot of information in advance of next month's Winchester 400.

"With the weekend we had, I now feel very confident for when we come back in here in October," said Coughlin.  "I love Winchester and I've won this race before.  Now I would love to add my name to the list of great names who have already won the Winchester 400.

"But I couldn't have a shot to win today or one in October without all those who support me, starting with my parents; without them, and without the blessings that the Lord has given us, none of this would be possible.  I also have to thank my crew chief, Nick (Easton), my spotter, Scott (Wimmer), our team manager, Kevin (Hamlin), and also Dave Holt (crew-member) for everything they do throughout each and every weekend.  This time is was also pretty cool to have my friends come to the track and others support me by watching the broadcast on Speed51.com.“

Cody Coughlin’s next race will be this coming Sunday, September 13th at his home-track of Columbus Motor Speedway (OH).  He will tackle some of the best Super Late Model racers in the country during the Bud St. Amant Memorial for the ARCA / CRA Super Series.