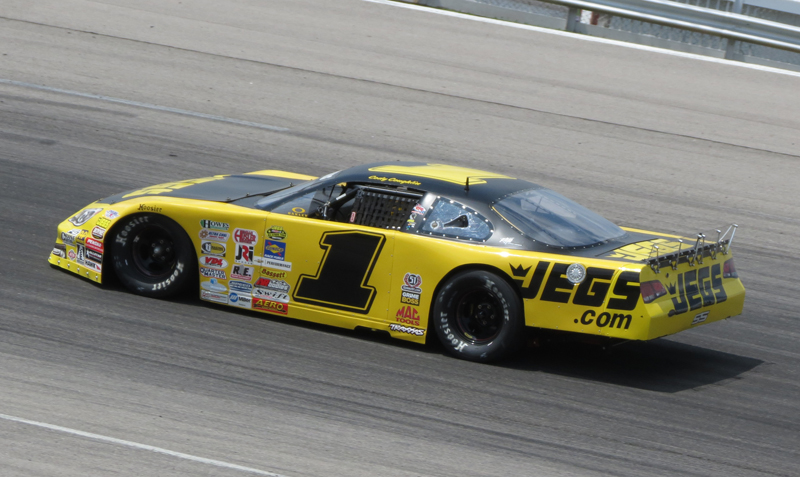 Cody Coughlin opened up the 2013 JEGS/CRA All-Stars Tour season with a sixth place finish this past Saturday night at the Mercy Masters of the Pros 144 at I-44 Speedway in Lebanon, MO.

The solid result was a momentum-building run for the 17-year-old from Delaware, Ohio in his chase for the 2013 JEGS Tour title.

“I feel like I drove a good race today,” said Coughlin after the 144-lap series opener.  “I passed a lot of cars and learned a little bit more about saving tires.  “This is a really cool place. The bottom groove came in a little bit more than I thought it would.  We were tight all night long and we hooked the apron a little bit in order to get the car to rotate. It is definitely a cool racetrack, though.  It was also fun to come out west a little and see a little more of America. We will write down some notes and come back even stronger the next time out.”

Coughlin qualified his JEGS.com No. 1 in the seventh position for the feature event and he stayed up front throughout the early portions of the event.  As his car continued to improve, Coughlin got up into a podium position in the closing laps, only to get bounced back a few positions due to contact from another competitor.

“We were up in third, but another driver ran into me and I lost a few positions. It was frustrating, but I gathered up my thoughts and kept going to finish sixth.  It was disappointing to drop back a few spots like that, but looking big-picture a sixth is still a good way to start the season in the series.

“Chase (Elliott, race winner) was in a league of his own and I think we could have gotten to second, so this is pretty disappointing to finish sixth,” Coughlin said. “But, we will go on and keep digging.”

Coughlin will have plenty of notes to go over with Freddie Query (Consultant), Nick Easton (Crew Chief), and Scott Wimmer (Spotter) as Team JEGS prepares for their next event, one in their own back yard.

The next race on the JEGS/CRA All-Stars Tour comes this Saturday, May 25 at Columbus Motor Speedway in Ohio.  The track is just a few miles away from Coughlin’s race shop and the JEGS.com offices.

“We are looking forward to next Saturday night. There will be a lot of friends and family members there along with many of the JEGS associates,” Coughlin said. “We are blessed to have a great team and supporters from our family, friends, and associates with JEGS.  We hope to give them all a good show and hopefully we can get a ‘W’ for them.”