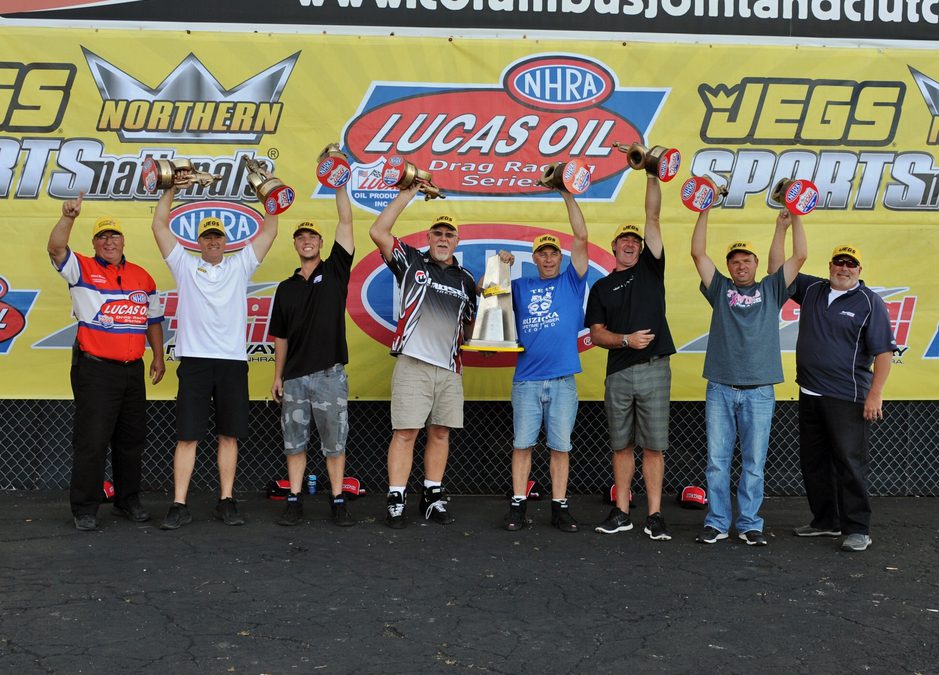 Not only did Coughlin win in both Stock Eliminator and in Super Gas but the win in Stock makes him the first driver to win an NHRA National event in seven different classes.  The second generation driver has won in Pro Stock, Super Gas, Super Comp, Super Stock, Comp, Top Dragster and now in Stock.

Coughlin, Delaware, Ohio, first meet up with Paul Brown, Cass City, Mich., in Super Gas, taking the win in 9.949 seconds at 156.52 mph in his ’10 Corvette.  The same car his nephew Troy Coughlin Jr. won this event in last year.  He then faced off with former NHRA Lucas Oil National Champion Randy Wilkes in Stock. Coughlin turned on the win light right off the line when Wilkes, Zanesville, Ohio, went red. Coughlin took his ’10 Challenger straight to winner’s circle where he celebrated with his Dad, Jeg Sr., and the entire JEGS team.

In the Moser Sportsman Shootout it was Rienschield out of Brookville, Ind., holding off Marco Abruzzi in the final round with his ’69 Corvette.  Rienschield dialed up a 7.53 to Abruzzi’s 4.07 then put a perfect .000 second reaction time on the board with a 7.550 second pass for the win.  Abruzzi, Warren, Ohio, was right there with a 4.072 second lap at 177.42 mph in his Top Dragster.

Abruzzi also advanced to the final round of Top Dragster for the JEGS event where he meet up with Joe Hessling of Toledo, Ohio.  Hessling was better at the start with a 0.10 second reaction time that proved to be the difference clocking in at 6.371, 206.35 to Abruzzi’s 6.351, 218.27.

In Top Sportsman it was Tim Irwin collecting his first NHRA Wally trophy as he put his Moser Engineering ’98 Lumina in the winner’s circle with a 0.11 package.  The Portland, Ind., racer went 7.516 on a 7.51 dial to hold off Mark McDonald, Boonville, Ind., and his ’67 Mustang with a run of 6.885.

Shawn Fricke and Mike Ruzicka grabbed the wins in Super Comp and Super Street respectively.  Fricke, coming down from Flemmington, N.J., posted an 8.890 at 176.07 to win over Steve Hoyt, Fort Wayne, Ind., in a double breakout.  Ruzkicka and Phil Smida, Canfield, Ohio, left the line together with Ruzkicka taking the strip in 10.902 to Smida's 10.918.