Coughlin Geared up for First Run with KBM at Michigan 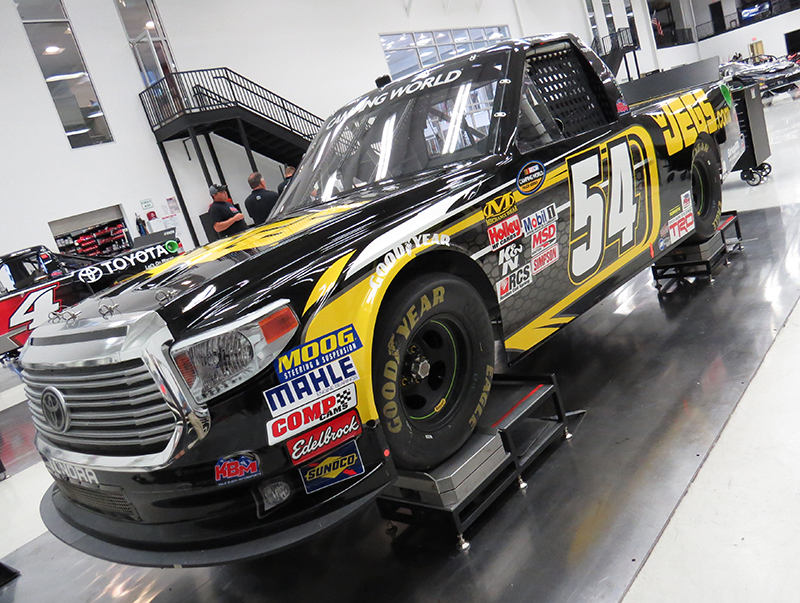 The Delaware, Ohio native enjoys racing on the faster speedways around America, and the big oval in Michigan's Irish Hills is one of the fastest out there.

"Michigan is a really fast race track, and I like that," said Coughlin, who will pilot the No. 54 JEGS.com Toyota Tundra.  "It's very wide with plenty of room to race, but at the end of the day it's just another track that's all about getting your truck to handle as best as possible."

Coughlin has made two prior starts at Michigan in the ARCA Racing Series.  He qualified in the top 10 and showed speed all weekend long both times, but circumstances gave him finishes just outside of the top 10 in each of them.

While he's been fast in an ARCA stock car at Michigan in the past, Coughlin expects the race to be quite a bit different in a truck.

"I think the aerodynamics of the truck with more downforce and side-force than an ARCA car will make the draft even more important," Coughlin said.  "It'll be tight racing for sure and that will be exciting.  It won't be anything like Daytona, but drafting and working the air will be big."

In Coughlin's one prior NASCAR Camping World Truck Series start, Coughlin did not turn a lap around the track until the green flag flew at Kentucky Speedway due to rain washing out practice and qualifying.  After starting near the rear of the field with an independent Truck Series team, which had limited owners points, he finished a respectable 20th.

Now he's getting to race for Kyle Busch Motorsports, which is one of the strongest teams in the series.  Coughlin said he is extremely excited for the opportunity to race the best equipment out there.

"KBM is obviously the best team out there," said Coughlin.  "It's an honor to be able to drive for them.  I'm hoping to bring it home with a good finish.  The key things is to earn respect of the other competitors and enjoy my time with the guys on the team.

"I'm just thankful that I've been given the opportunity to be able race for this team and try to continue to climb the racing ladder.  My parents (John and Di) have been incredibly supportive as I've chased my racing dreams, as has my sister, Kennedi.  God has blessed me with a wonderfully supportive family that I can't thank enough.  Kevin (Hamlin – Team JEGS General Manager) and Dave (Holt – Team JEGS crewmember) will be coming along too so I will have a lot of people to pull from for infomation.“

Kyle Busch Motorsports (KBM) has quickly established itself as one of the most successful teams in all of NASCAR. Owned by NASCAR superstar Kyle Busch and fueled by his passion for winning, the team has already collected three NASCAR Camping World Truck Series Owner’s Championships and entered 2015 with a remarkable 39 Truck Series victories across its five-year existence, including a single-season series’ record 14 wins in 2014.

KBM prepares a fleet of race-winning Toyotas out of its state-of-the art 77,000-square-foot facility in Mooresville, N.C. Fans can stay up-to-date with all the latest KBM news online at www.KyleBuschMotorsports.com, by liking the team on Facebook (KBMteam) and by following the team on Twitter (@KBMteam) and Google+ (+KBMteam).