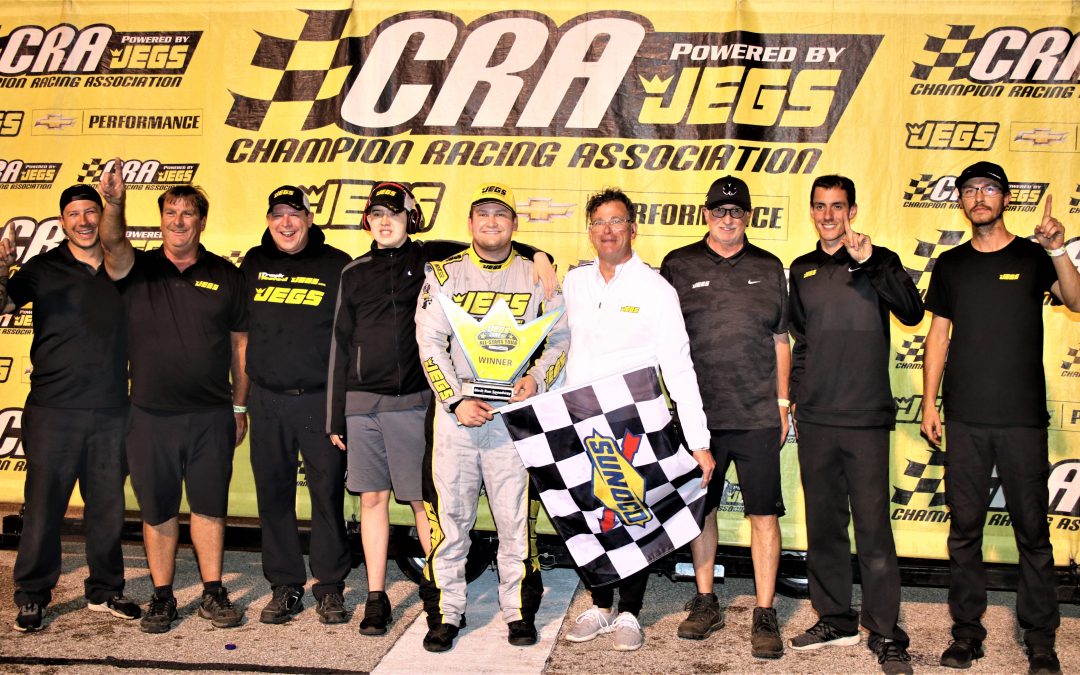 Three-time JEGS/CRA All-Stars Tour Presented by Chevrolet Performance Champion Cody Coughlin picked up a JEGS/CRA All-Stars Tour leading third win of the season in Saturday night’s Back to the Bricks Shoot Out at the Dixie 100 Presented by JEGS.com at Birch Run Speedway. Coughlin had to battle Carson Hocevar and Kyle Crump to earn the win, his second series win at Birch Run Speedway, he got a win at Birch Run in 2013 on his way to winning his first Championship with the series.

“Man, that one felt good,” remarked Coughlin in victory lane. “This is a great track, we really like coming here to race, the fans here are really awesome! The car was really good in the first practice session today, I knew it would race good. I didn’t qualify as well as I wanted, I was glad we avoided that first lap incident, a lot of cars around us got damaged. It was a lot of fun racing with (Kyle) Crump and (Carson) Hocevar, they are both great racers. That last caution worried me a little, you just never know what’s going to happen on a restart. Hocevar raced me hard, but I was able to get past him and go on to get the win. I have to thank my team for all their hard work!” 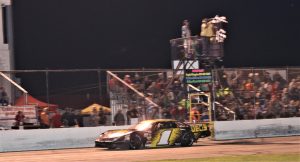 With the field coming to the green to start the race, pole sitter Chase Burda had an issue that stacked up the field behind him causing a red flag and a total restart. The cars of Burda, Dan Leeck, Katie Hettinger and Jimmy Tucker were all done for the evening in that incident with too much damage to continue.

Crump got the jump over Hocevar on the restart from his outside front row starting position. Crump, Hocevar and Coughlin would pull away from the rest of the field as they worked their way through most of the field, lapping up to the eighth position before the second caution of the event flew on lap 85 when the 27 car of David Killian brushed the turn four wall.

Coughlin and Hocevar both got a great jump on the restart with Hocevar leading lap 86 on the outside. The pair raced several laps side by side before Coughlin was able to pull ahead and get the lead. Coughlin would pull away from Hocevar and get the win by a little over a second. For his pass of Hocevar to get the lead back on the last restart Coughlin picked up the AR Bodies Cool Move of the Race and he earned a Hoosier Racing Tire Performance Award. With the win Coughlin is the Regular Season Champion for the series, the series will begin their 2021 Chase for the Championship at Berlin Raceway on August 21st were Coughlin looks to get his fourth series Championship.

Hocevar would hold off a hard charging Crump to finish in second place in the NASCAR Camping World Truck Series competitors first series event of the year. Crump would finish in second, it was his first series event in several seasons, and the first ever event for the Crosstown Auto and Truck Parts team and owner Robert Wheeler, who field an Outlaw Late Model for Crump when he’s not racing Stan and Judi Rosen’s ARCA/CRA Super Series car.

Anthony Danta would finish in fourth place in his first series event of the season after battling hard for a top five finishing position. Andrew Scheid would finish in fifth place and pick up the Senneker Performance Rookie of the Race and the Sweet Manufacturing Sweet Move of the Race in getting his best finish ever with the series, in a season that has been plagued with bad luck for the young driver.

Lakeland, Florida native Steve Dorer would battle back from the tail of the field after being involved in the first lap incident to finish in sixth place. Dorer’s crew earned the PitBoxes.com Pit Crew of the Race Award for the hasty repairs they made to Dorer’s car so he could get back in the race. Ethan Stadniczuk finished in seventh after qualifying second and racing in the top five in the first half of the race. Series rookie Tanner Jack would bring home a battered car from the first lap incident to an eighth-place finish. Kevin Cremonesi would finish in ninth place, also with some damage and James Kruger rounded out the top ten.

Albert Francis was the Jerico Performance Parts Fast Qualifier and picked up a pair of specialty Corn Hole Boards from VanDoorn Racing Development for turning the fastest lap in qualifying.

The next JEGS/CRA All-Stars Tour event will be the Battle at Berlin 150 Presented by Sip Shine on August 20th and 21st at Berlin Raceway.