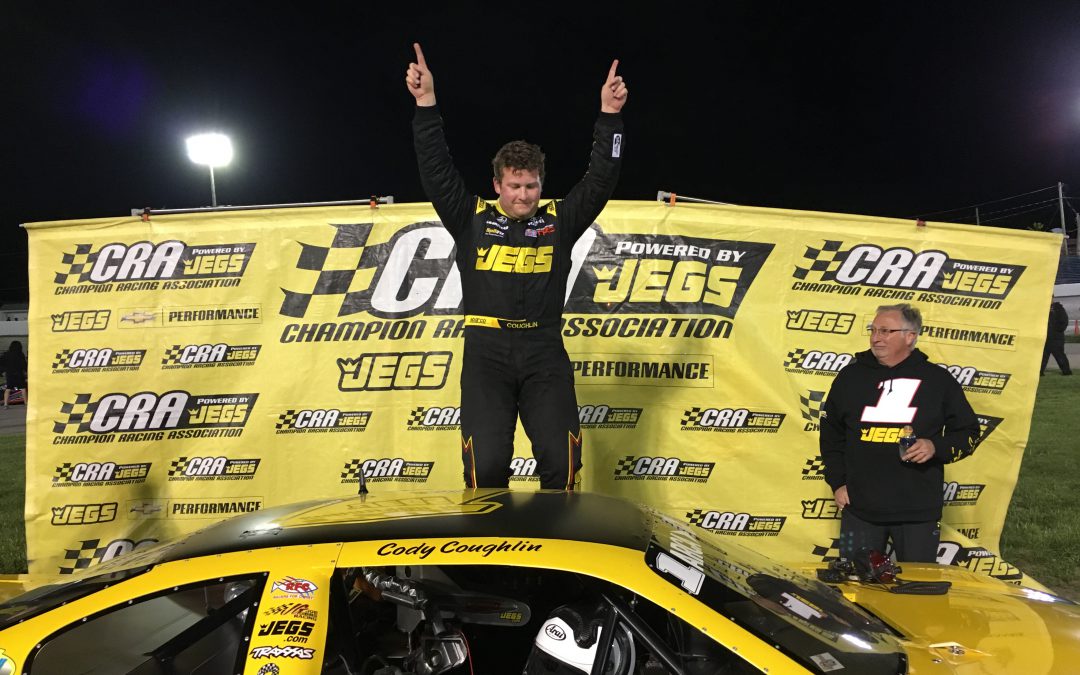 Cody Coughlin winning an ARCA/CRA Super Series race is starting to become a familiar sight.  For the second straight race, Coughlin and the Team JEGS crew ended the day by celebrating in victory lane with a race win.

The Joe Gibbs Racing Development Driver had one of the fastest drivers all day long.  His car, prepared by crew chief Jack Smith, was near the top of the charts in practice and Coughlin barely missed out on the fast time award.

After starting in the fourth position, Coughlin quickly but methodically worked his way closer and closer to the front.  The 20 year-old driver took the lead for the first time on a lap 42 restart, and started to drive away from the field.

The Delaware, Ohio native dealt with multiple restarts thanks to the double-digit cautions that marred the event, but he held strong on almost all of them.  With about 40 laps to go he was passed, but he remained calm and eventually worked his way back into the top spot near 25 laps to go.

From there it was Coughlin’s race as he drove away to almost a 20 car-length lead to take his second straight win and further pad his series points lead.

“I want to win everywhere I go, but especially at this place because it’s given us fits in the past,” said Coughlin.  “There was some hard racing, which is really the root of the sport, so she’s got some bumps and bruises on her, but we got the trophy and we’ll move onto the next one.”

On Friday night Coughlin made his second NASCAR Camping World Truck Series start of the season for Kyle Busch Motorsports and after a flat tire and trip to the garage, he finished 27th.  Coming back to a Super Late Model race and winning the next day he said is great for his confidence moving forward.

“I couldn’t be happier right now,” said Coughlin.  “I love running Super Late Models and being able to win two in a row is fantastic.”

This win is one of the more special ones for the whole Coughlin family.  His parents, Di and John, were in attendance to watch him score the victory on Mother’s Day weekend.

“That was super fun,” Coughlin said.  “She’s (mom) my biggest supporter.  I thank God for her.  Getting this win for her makes me really happy and I can’t wait to bring the trophy home to share it with my sister (Kennedi) and my whole family.”

Coughlin’s next race is one week from now on May 14.  He will return to the Pro Late Model ranks in the Mercy Masters of the Pros 144 at Lebanon I-44 Speedway in Missouri.  After two straight Late Model wins Coughlin believes he can make it three in a row.

“I know that Jack (Smith, crew chief) will give me another great car, Kevin Hamlin (team manager) will get those tires right, Scott Wimmer (spotter) will keep me out of trouble, and Dave Holt (crew member) will work as hard as always, and we’ll be able to contend for another win.”