Coughlin Goes From Back to Front Twice at Anderson 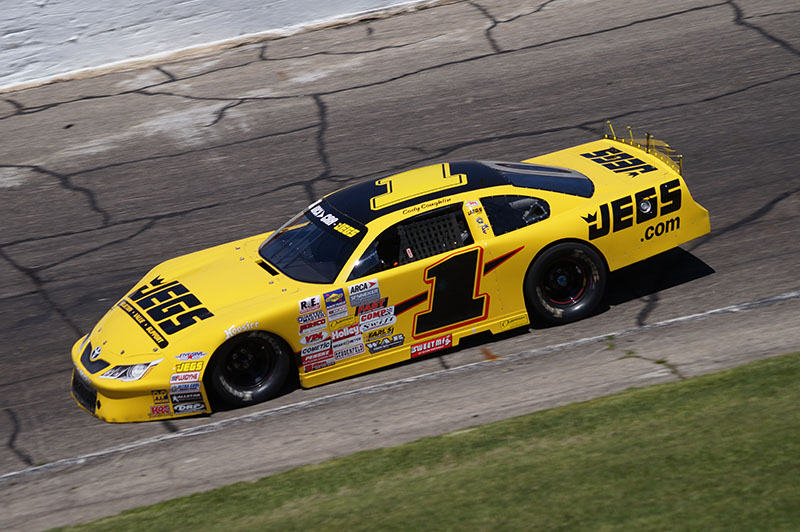 The words “give up” are certainly not in Cody Coughlin’s vocabulary. Coughlin came from the back of the field to the front of the field twice at Indiana’s Anderson Speedway.  A late-race crash took Coughlin out of contention out of the race after an unreal performance and relegated him to a 10th-place finish in the Koorsen Fire & Security 125 for the ARCA / CRA Super Series.

Coughlin qualified second overall in time trials and was slated to start sixth after the invert before he and his Team JEGS crew decided to pull the car out of the impound line to make last-minute adjustments.  That meant that the NASCAR Camping World Truck Series driver for ThorSport Racing would have to start at the back of the field.

The 21-year-old driver carefully and methodically worked his way from the 14th starting position to the front of the field. By lap 80 Coughlin was in third and knocking on the door of the top two.

“We had a good car today, but just didn’t have the forward drive that we really needed,” said Coughlin, a Joe Gibbs Racing Development Driver. “That’s why we pulled it out of impound.  We wanted to make some adjustments to really dial it in, because we knew we’d be able to come from the back to the front.”

The Delaware, Ohio native entered Sunday’s race as the defending winner of this event, and it was looking like he was going to replicate last year’s efforts as he began applying pressure to the car in front of him for the second position.  Unfortunately, both drivers were involved in an incident and Coughlin had to restart in the rear of the field once again.

Coughlin was quickly working his way back through the field when he and another driver got together and crashed hard at the exit of turn two.

“That wasn’t what we wanted to have happen, but that’s racing on a small bullring,” said Coughlin.  “I’m okay and I hope he is okay too. We’ll move on and get them next time. I just have to thank Kevin (Hamlin, crew chief) for all of his hard work getting the car ready, as well as Terry (Cook, spotter), Dave (Holt, crew member) and Jon (Szitti, crew member). I really appreciate everything they did this weekend.  Lastly, I have to thank God for keeping me safe out there.”

Coughlin will be back in action on Friday, May 12th at Kansas Speedway as he climbs back behind the wheel of his No. 13 JEGS.com/RIDE TV Toyota Tundra for ThorSport Racing in the NASCAR Camping World Truck Series.