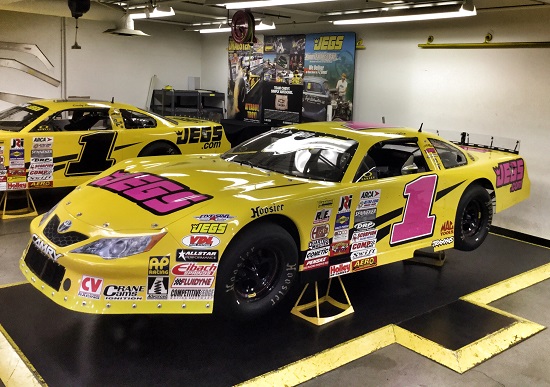 The Winchester 400 at Indiana's Winchester Speedway is a special race in the world of short track racing, but it will be special this weekend for Cody Coughlin and the Team JEGS crew for an all together different reason.  Coughlin and the team will be honoring all who are affected by breast cancer by running a special pink scheme on the No. 1 Toyota Camry.

The JEGS Foundation does a lot to raise funds and awareness for breast cancer research all throughout the year, but especially during the month of October, which is Breast Cancer Awareness Month.

In addition to a pink-numbered car, Cody Coughlin and his crew will be handing out gift packages at Sunday's pre-race autograph signing to those affected by the disease.  It is a tradition that was started a few years ago, and is one that Coughlin looks forward to when he arrives at Winchester Speedway in October.

"Everybody has been affected by this disease in some way, whether directly or indirectly," said Coughlin.  "It's just nice to be able to help someone out in any way, even a little way such as what we do with the car decals and our gift packages."

Coughlin will have another decal on the side of his race car this weekend.  This one is for Winchester Speedway's long-time gate operator, Finley Lane.  Mr. Lane passed away just a few days after the running of the Winchester 100 on Labor Day last month at the age of 79.

The Coughlin family’s personal experiences with cancer drove them to assist in building awareness of the many faces of cancer and help generate dollars through race earnings to advance cancer research.

The JEGS Foundation “Racing for Cancer Research” is honored to be affiliated with one of only 39 nationally-designated Comprehensive Cancer Centers, The Arthur G. James Cancer Hospital and Richard J. Solove Research Institute at The Ohio State University in Columbus, OH.

For more information on Cody Coughlin and Team JEGS, visit www.teamjegs.com and follow Cody on Twitter, @Cody_Coughlin.  Follow Team JEGS on Twitter, @TeamJEGS, and “Like”JEGS Performance on Facebook.  Any other inquiries for Cody Coughlin can be sent to Bob Dillner via email at bd51sports@gmail.com.