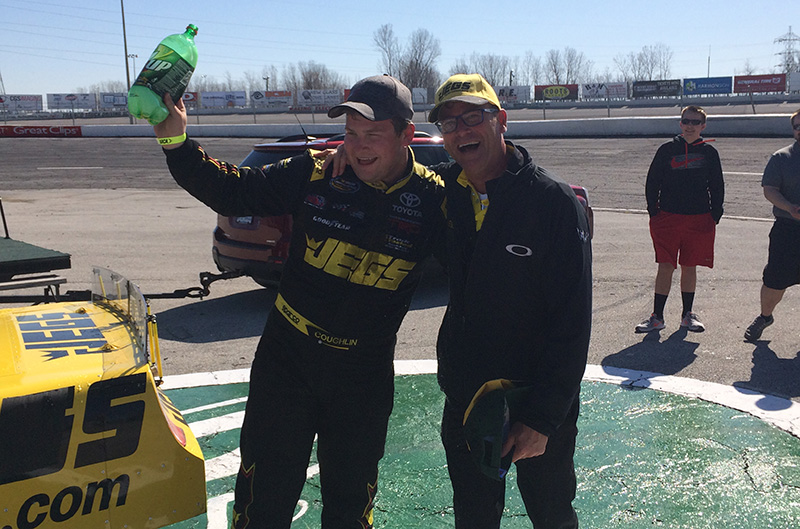 NASCAR Camping World Truck Series driver Cody Coughlin is returning to his racing roots on Saturday at Ohio’s Toledo Speedway.  Coughlin, the reigning ARCA/CRA Super Series champion, will step into his No. 1 JEGS.com Super Late Model for the first time this season at the Spring 200 for the ARCA/CRA Super Series.

The 21-year-old Ohio native returns as the defending winner of the event.  Coughlin graced victory lane in the 100-lap Super Late Model portion of the Spring 200 one year ago at Toledo.  That’s a big reason why Coughlin has decided to give up an off weekend from his NASCAR Camping World Truck Series schedule to go racing at Toledo.

“I’m super excited to get back in my Late Model,” said Coughlin, a Joe Gibbs Racing Development Driver.  “Toledo was one of my favorite tracks even before I won there last year.”

In the NCWTS with ThorSport Racing, Coughlin has tied his career-best finish twice this season.  While on the current month-long spring break, Coughlin said racing a Late Model is the best way to keep his skills and reactions as sharp as possible so that when the trucks get on track at Kansas Speedway next month, he can go out and set a new career-best finish.

“When I’m not in my Toyota Tundra for ThorSport Racing I want to be in my Late Model as much as possible,” Coughlin said.  “I know I’ll be competitive and have a chance to win, and that is good for my confidence, and it’s good for my abilities to still be in the race car.

“What’s really great is having the opportunities to do all of these things, and I can’t be more appreciative of my parents (Di and John) and Duke and Rhonda Thorson for all they are doing for me.  I’m really glad that I have the chance to race my Late Model this weekend and get back with my guys that I won two championships with last year.  It’s going to be awesome to work with Jack (Smith, crew chief), Kevin (Hamlin, team manager) and Dave (Holt, crew member) again.  It’s also going to be great to have Terry (Cook) come and spot for me.”

Ohio race fans will have the chance to meet their favorite NASCAR Camping World Truck Series driver during the on-track autograph session that is scheduled to take place immediately after qualifying is complete.

Coughlin will resume his NASCAR Camping World Truck Series duties on Friday, May 12 at Kansas Speedway.