Coughlin Grabs the Hardware from a History Making Season 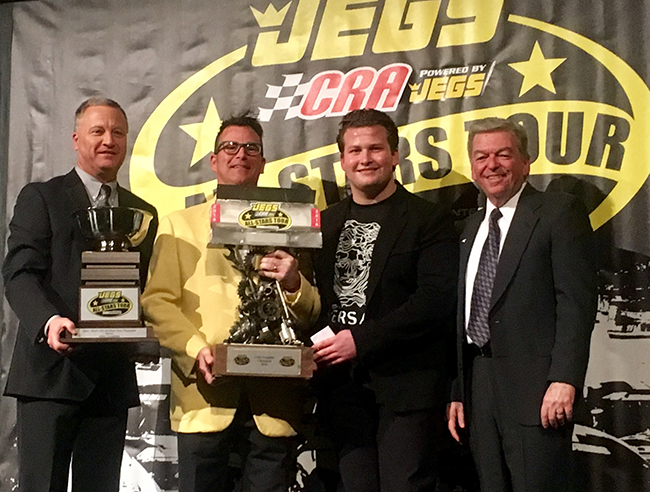 History is officially complete.  Cody Coughlin has now received all the hardware that comes with being the first driver to win both the ARCA/CRA Super Series and JEGS/CRA All-Stars Tour championships in the same season.

The 21-year-old driver made that history by winning both Late Model titles under the Champion Racing Association banner, all the while winning a total of six races in 2016.

“This was the best year of my career,” Coughlin said during his speech.  “We didn’t have plans to run full-time in both divisions, but after the race at I-44 (for the JEGS All-Stars Tour) we decided to stick with it and we were able to make history; that's pretty cool.”

Coughlin was joined at the banquet by his mother, Di, his father, John, and his sister, Kennedi, as well as his championship winning race team.

With JEGS as the title sponsor for the JEGS/CRA All-Stars Tour, Coughlin was presented the All-Stars Tour championship trophy by his father, John, in a special moment for the two of them.

“I think it’s really cool,” Coughlin said after the banquet.  “When you win these things you don’t really get to think about it at the race track.  When you come here with your peers and see some cool photos and hear some of the stats that you kind of forgot about, it really sinks in.  That makes it really special, as does having all of my guys here.  Jack (Smith, crew chief), Kevin (Hamlin, team manager), Dave (Holt, crew-member) and Scott (Wimmer, spotter) all had a hand in these championships so I share it with them.

“It’s also really special to have my mom, dad, and my sister here tonight too.  They’re so supportive of everything I do and I wouldn’t be where I am without them.  I was truly blessed by God with a wonderful family and a fantastic year.”

For more information on Cody Coughlin and Team JEGS, visit www.teamjegs.com and follow Cody on Twitter, @Cody_Coughlin.  Follow Team JEGS on Twitter, @TeamJEGS, and “Like”JEGS Performance on Facebook.  Any other inquiries for Cody Coughlin can be sent to Bob Dillner via email at bd51sports@gmail.com.