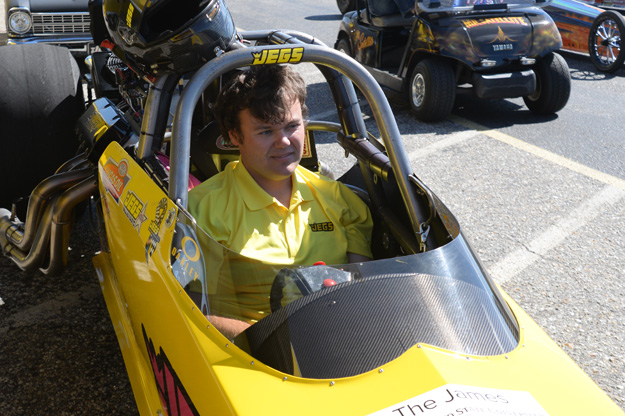 MONTGOMERY, Ala. (Oct. 22) – A main event victory at the CARS Protection Plus Million Dollar Drag race wasn’t in the cards for versatile racer Troy Coughlin Jr., but it wasn’t for lack of effort. With a massive $300,000 top prize on the line, Coughlin came prepared for battle with two entries; his JEGS.com dragster and the Chevy II station wagon owned by his uncle, Jeg Jr.

In the Chevy II, Coughlin suffered a round two loss and his hopes for a victory ended a round later when he lost in the dragster. In both cases, Coughlin felt that his finish line driving, the ability to make each race as close as possible in order to avoid a breakout was the missing ingredient.

“We’ve been here for three days but I just haven’t gotten in a rhythm yet as far as seeing and acting on the pictures I see at the finish line,” said Coughlin. “I’m definitely struggling in uncle Jeg’s station wagon because I don’t have a lot of seat time in that car. It’s like anything else, the more runs you make the more comfortable you’re going to be.”

The CARS Protection Plus Million Dollar Drag Race will wrap up on Sunday with the final event, the Mickey Thompson Triple 25 event that will pay $25,000 to the champion. Coughlin will continue his pursuit of the title in both race cars.

“I feel better going into Sunday’s race just from the runs I’ve made the last three days,” Coughlin said. “After three days, I have made about 8-10 runs in each car so Justin [Beaver, crew chief] and I have a lot of notes that we can use. We don’t give up easily so we’re going to be out there on Sunday giving it another shot.”