Coughlin Has Fun in Top-20 Finish at Eldora 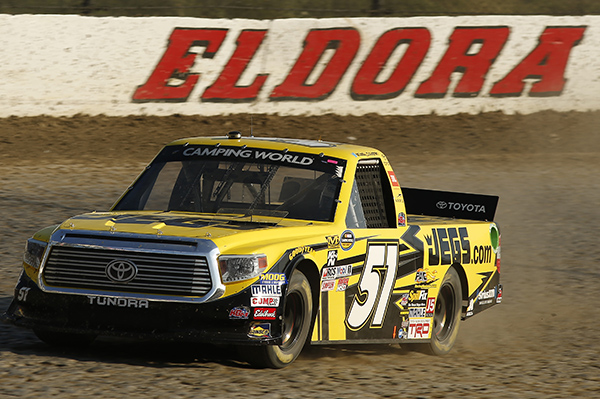 Cody Coughlin’s first foray into the dirt racing world is now in the rear view mirror.  After learning the dirt craft in practice and his heat race, Coughlin raced his way into the NASCAR Camping World Truck Series Aspen Dental Eldora Dirt Derby main event at Eldora Speedway (OH) by winning the Last Chance Qualifier.  Then he impressed many raced his way all the up to ninth after starting 26th in his JEGS.com No. 51 Toyota Tundra for Kyle Busch Motorsports.

Coughlin eventually finished 19th after a mid-race spin due to a flat tire, but he summed up his evening slinging mud in one word.  “Fun.”

“Overall I had a really good time,” Coughlin said after the race.

The 20-year-old driver made up almost all of his positions by running the bottom during the first half of the race.  He and two-time series champion Matt Crafton were the only ones that were able to pass on the bottom for much of the race.

“To me it felt like there was a little bit of grip down there,” explained Coughlin.  “I saw Crafton working it down there. Plus, you’ve got to go where they’re not and that’s pretty much what I wanted to do.”

Wednesday’s race at Eldora in Rossburg, Ohio was basically a home race for Coughlin.  The Joe Gibbs Racing Development driver hails from Delaware, Ohio, so he had plenty of friends and family in attendance.

Coughlin put on a show for the first half of the race for his home state crowd before his right-front tire went down, causing his spin in turn four.  Coughlin and his JEGS.com Kyle Busch Motorsports team battled back to still score a solid top-20 finish in his first appearance on dirt.

“On one of those restarts it cut down and I just lost all grip,” Coughlin said.  “It stinks that happened because we easily had a top-10 truck, but I still had a really good time and I’m really thankful that my parents, Di and John, and my owners, Kyle and Samantha Busch gave me the opportunity to do this.  I can’t thank all of them, and my sister Kennedi, enough for all of their support. Bono (Manion, crew chief) and the 51 team guided me throughout the day.  I feel very blessed.”

Coughlin heads back to the pavement on Friday night when he straps back into his Super Late Model for the ARCA/CRA Super Series Circle City 100 at Lucas Oil Raceway in Indianapolis, Indiana. Coughlin is the points leader and a three-time winner in that series so far this season.

“I can’t wait to be back on pavement,” joked Coughlin.