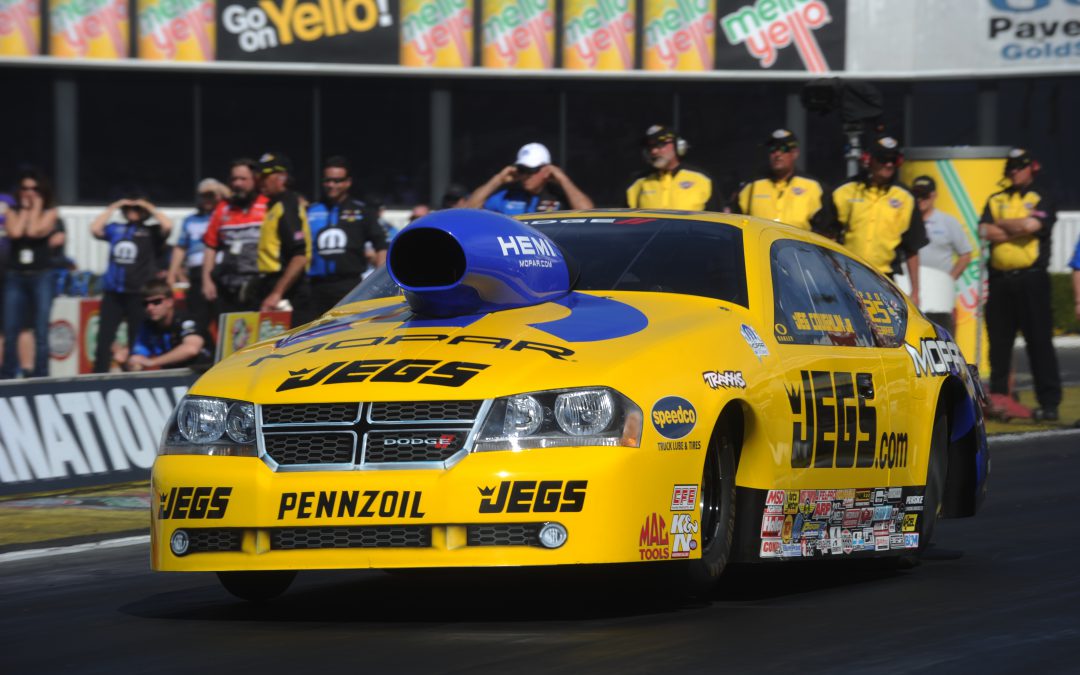 "The last six runs we made in Pomona, the two during Saturday qualifying and four we made on race day, gave us so much confidence and that feeling is leading us into Phoenix with a lot of positive attitudes," Coughlin said. "The only thing we could have done better was win the race so we'll try to take that final step this weekend. Phoenix would be a great place to put the JEGS.com/Mopar Dodge Avenger in the winner's circle."

A two-time winner at Firebird International Raceway (2000 and 2009), Coughlin gave away the win last Sunday after waiting on final-round opponent Vincent Nobile when his young rival stalled out on the track following his prerace burnout. The commotion eventually led to a rare red-light start for Coughlin, but he took solace in the fact he ran quicker than Nobile to the finish line.

"The guys performed flawlessly and we had a car that was more than capable of winning," Coughlin said. "That's all you can ask for. We'll win more of those deals than we'll lose so you just move forward.

"Pomona marked the first time that this entire group worked together in the heat of a real battle and they responded so well. That may sound trivial but there are so many things that need to happen for a team to have success and everyone being on the same page is very important to success."

Currently second in the points, Coughlin knows another strong outing could put him on top of the heap.

"We've won there in the past so we know how to get it done," Coughlin said. "It's a storied facility and between the drag strip, the Bondurant School and the lake, there's so much history. I stay at the track in a motorhome and I always enjoy my morning jog around the lake or a bike ride over to those foothills. It's a great way to focus your mind on the racing ahead."

Joining Coughlin this weekend in the JEGS.com camp will be his nephew, Troy Coughlin Jr., who will be driving a '57 Corvette roadster in the Super Gas category. Troy Jr. already has two national event wins in the Super Comp class on his resume.

"The last time I drove a racecar prepared by my Uncle Jeg it was 2009 and I was in Las Vegas, so yeah, I'm pretty excited about Phoenix," said T.J., referring to his first career win at the Las Vegas Nationals. "I'm so happy to have this opportunity. Kevin (Kleinweber) drove this car in Pomona last weekend and he said it was perfect so all I need to do is not mess anything up and I should be good.

"I've been working hard this off season on my reaction times and I've also been working with a trainer to get in better shape. Now it's time to go racing and having my Uncle Jeg there to help me is better than anything I could ask for to start the season."

Sportsman qualifying begins at 8 a.m., Friday. Pro Stock opens with two qualifying rounds at 2 and 4 p.m., Friday, and continues with two more sessions at 12:30 and 2:30 p.m., Saturday. Eliminations will begin at 11 a.m., Sunday. Qualifying and elimination action will be broadcast on ESPN2.