Coughlin Heading Back to Ohio Looking to Pad Points Lead 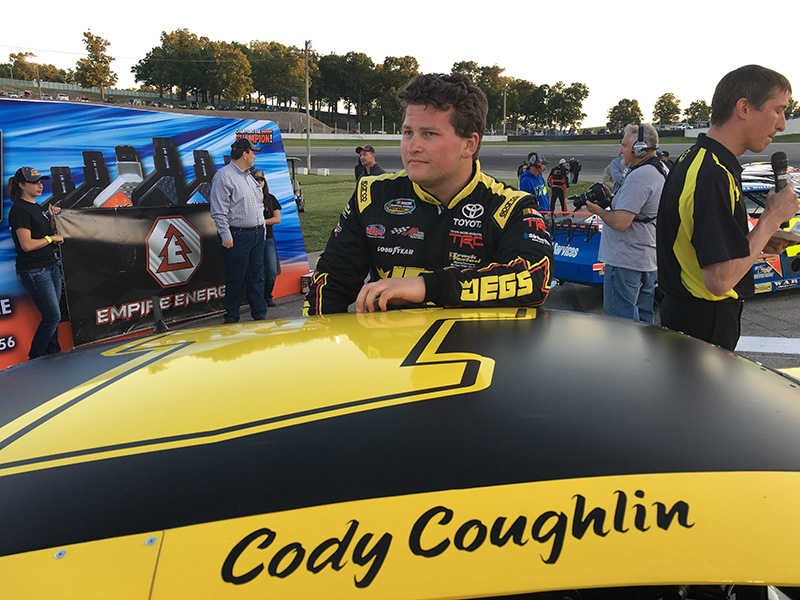 Cody Coughlin is heading to his home-state of Ohio this weekend as one of the most accomplished race car drivers in America in 2016.  The Joe Gibbs Racing Development driver will compete in a Pro Late Model series just about an hour north of his home town of Delaware, Ohio.  Coughlin will pilot the JEGS.com No. 1 Toyota Camry in the Bud St. Amant Memorial 125 at Spitzer Motor Speedway with the JEGS/CRA All-Stars Tour.

Spitzer Motor Speedway, formerly known as Mansfield Motorsports Park, is a track that Coughlin has never raced at.  The track closed its doors in 2010 before reopening at the start of this year.

“I’ve never run there, but I really want to win there,” Coughlin said.  “I’d really like to become the first winner at Spitzer in the JEGS Tour.  Hopefully we’ll get that done on Saturday night.”

“I really hope we get a win, but what’s most important is the championship,” said Coughlin.  “It would be really cool if we can win the championship in both divisions.  We’re getting closer to achieving that goal.  We just need to keep having strong runs like we’ve been doing.”

Coughlin enters Saturday’s race also hoping to start a new streak.  Earlier this season he won three straight races in ARCA/CRA Super Series competition.  Now he heads to Spitzer with the potential to do the same thing, but with the JEGS Tour.  Coughlin has won the last two JEGS Tour races at Salem Speedway and Anderson Speedway.

“We’ve really been having a great year so far,” said Coughlin.  “We’ve won quite a few races this year, and it would be really cool to win three straight again.  I’m just glad we’re in a position to be winning races and hopefully the championship too.

“I have to thank my guys for all of their hard work because I know I wouldn’t be in this position without them.  Jack (Smith, crew chief) has been awesome to work with all year long.  He has really helped me out a lot, as has Kevin (Hamlin, team manager), Scott (Wimmer, spotter), and Dave (Holt, crew member).  I also have to thank my parents (Di and John), and my sister Kennedi for their continued support.  I wouldn’t be where I am without them.  I’ve been truly blessed to have them in my life.”

Coughlin hits the track for the first time at Spitzer Speedway on Friday, August 5 for practice from 1-5 p.m. ET.  Race day is Saturday, August 6 at Spitzer.  It begins with a one-hour practice session at 3 p.m.  Qualifying is set to follow at 5:15 with racing to begin at 7 p.m.