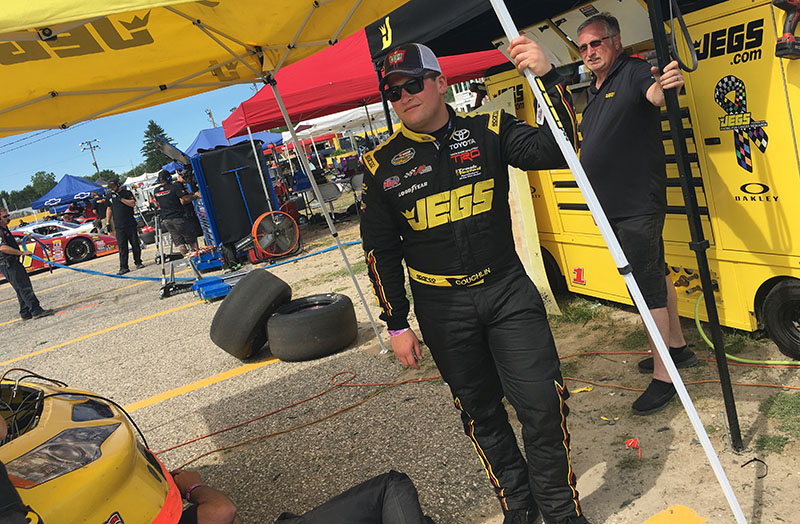 On Father’s Day Eve Cody Coughlin returns to the site of one of his previous victories, Indiana’s Salem Speedway.  Coughlin will pilot the JEGS.com No. 1 Toyota Pro Late Model in the JEGS/CRA All-Stars Tour JayC Food Stores 100 on the high-banks of Salem Speedway on Saturday, June 18.

“I’m really looking forward to Saturday at Salem,” the Joe Gibbs Racing Development Driver said.  “I really want to win again there, because it’s such a cool place.  To score a win on this particular weekend would make it even more special.”

Earlier this season Coughlin scored a win at Indiana’s Anderson Speedway the night before Mother’s Day.  A similar feat would be very special for Coughlin and his father, John, who is a former winner in the NHRA drag racing circuit.

“The support I get from my parents, Di and John, is incredible,” said Coughlin.  “I’d love to be able to score a win on Saturday night and share that with my dad.  It would really mean a lot to us.  When I was much younger I used to enjoy his victories and it’s pretty cool that now he is there to join me in victory lane.”

Coughlin’s chances of winning on Saturday night are as high as they’ve ever been.  The 20-year-old driver excels at the fast, high-banked half-mile ovals of Salem and its sister track, Winchester Speedway.  In addition to Coughlin’s Salem win, he has a win at Winchester and a runner-up finish in last year’s Winchester 400.

“Those tracks just fit my driving style,” said, the Ohio native, who has won three-straight points races on the CRA Super Series.  “I like being aggressive on the throttle and I like going fast.

“I know that we’ll have a great chance at winning on Saturday night because Jack (Smith, crew chief), Kevin (Hamlin, team manager), Dave (Holt, crew member), and Scott (Wimmer, spotter) will put together another fast race car for me.  I’m really thankful to have those guys on my side.  I’m also really thankful for all of the blessings that we’ve received from the good Lord.”