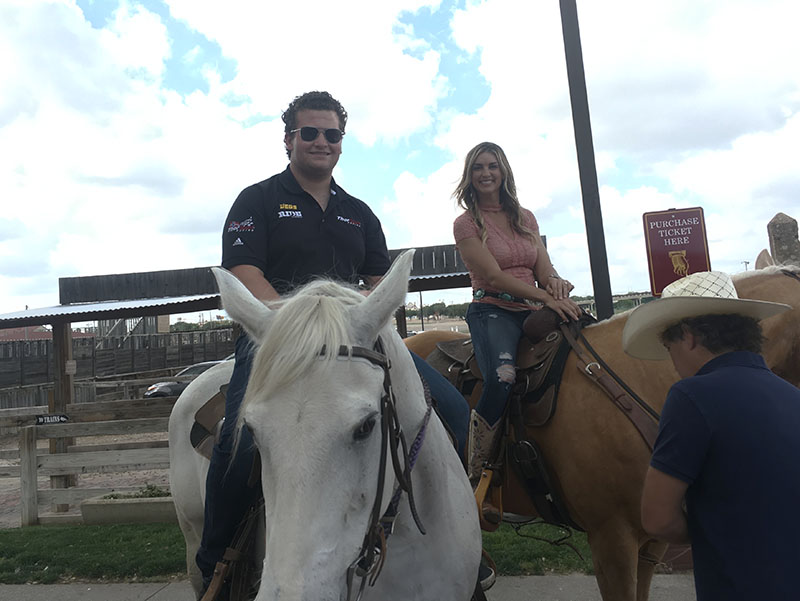 When Cody Coughlin took part in filming for RIDE TV’s “From Stock Cars to Stock Yards” he learned how to do a Texas Two-Step with co-host Paige Duke.  On Friday night, Coughlin is hoping to take that same step to success in his ThorSport Racing RIDE TV/JEGS.com No. 13 Toyota Tundra in the Winstar Online Gaming 400 for the NASCAR Camping World Truck Series at the Texas Motor Speedway.

Friday night’s race is the third time Coughlin will take on the fast 1.5-mile oval in Fort Worth, Texas. His best finish there came in his Texas debut one year ago when he finished 12th.

During the offseason, the track has undergone a facelift. The track was repaved, and turns one and two were reconfigured. Those turns now have less banking, and are also wider. With this Friday’s race being the first of two on the schedule for the trucks at Texas, this is Coughlin’s first time on the newly reconfigured and repaved racing surface.

Coughlin and his ThorSport Racing team have been steadily improving on the race track, but luck hasn’t always given them the finishes they have deserved. Coughlin raced inside the top five for much of his last race at Dover International Speedway (DE), but an issue with another competitor during a green flag pit stop robbed him of a chance at a finish in the top five.

Nevertheless, Coughlin said he’s feeling very positive about the performances of late by he and his team.

“I feel like Michael (Shelton, crew chief) and I are really starting to click and it’s starting to show. We’re finding speed and we’re running where we should be running. Now it’s just a matter of getting the finishes to reflect how well we’ve been running. The Lord has blessed me with this opportunity and I really want to give Duke and Rhonda Thorson and all of our supporters something to be proud of.”

Coughlin will hit the track on Thursday, June 8th for two practice sessions. He will qualify and race on Friday night. The Winstar Online Gaming 400 will take place at 8 p.m. ET/7 p.m. CT live on Fox Sports 1.