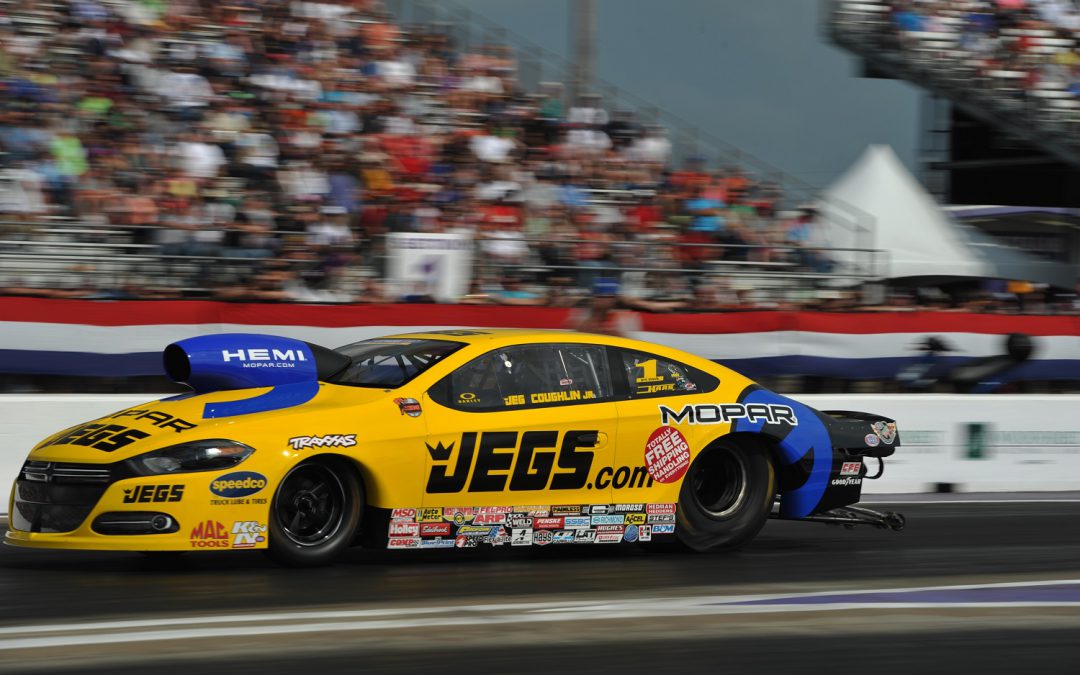 HOUSTON (April 27) — As competitive as NHRA Pro Stock racing is these days, the difference between winning and losing is measured in thousandths of a second.

JEGS.com/Mopar Dodge driver Jeg Coughlin Jr. was on the wrong side of that small margin for error in the semifinals on Sunday at Royal Purple Raceway, tripping the red-light .004-second too soon in a loss to Erica Enders-Stevens.

That red-light came after two brilliant reaction times for the five-time Pro Stock champion, as Coughlin was stellar in his Dodge Dart.

"I felt fantastic behind the wheel," Coughlin said. "I was .005 first round and .012 second round, and I was set up somewhere between .002 and .010 for that run and must've got it all again. Little bit unnecessary, quite frankly, to set up so tight but we'll make some adjustments. We've got two weeks off, so we'll be ready to go for Atlanta."

Coughlin did move up one spot to seventh in the Pro Stock standings, two points behind sixth-place Dave Connolly.

"We had a great weekend," Coughlin said.

He started Sunday with a match against four-time champion Greg Anderson, and the two drivers put on a show at the starting line, as Anderson left with a .015 light, but Coughlin was better on the Christmas Tree and the racetrack, making a pass of 6.609 seconds at 210.08 mph to outrun Anderson's 6.670 at 209.36 mph.

"We came out strong with a good qualifying effort in the No. 4 spot and then slowed down a little bit after that," said Coughlin, who ended up in the No. 6 slot. "(Crew chiefs) Adam (Hornberger) and Mark (Ingersoll) and the entire team got together and tried to figure out what they could do to help clean this thing up. They worked on it a little bit yesterday, worked on it some more this morning, and it looked like we had a better race car today. We were cleaning it up run by run."

"The car has been running great," Coughlin said. "We really only had one race where we didn't get away with it, and that was second round in Gainesville (Fla.). Other than that, it has been a fast race car.

"We've got two weeks off, and Adam and Mark and everyone on our team will be dissecting it between now and when we let the clutch out in Atlanta to make sure it's perfect."