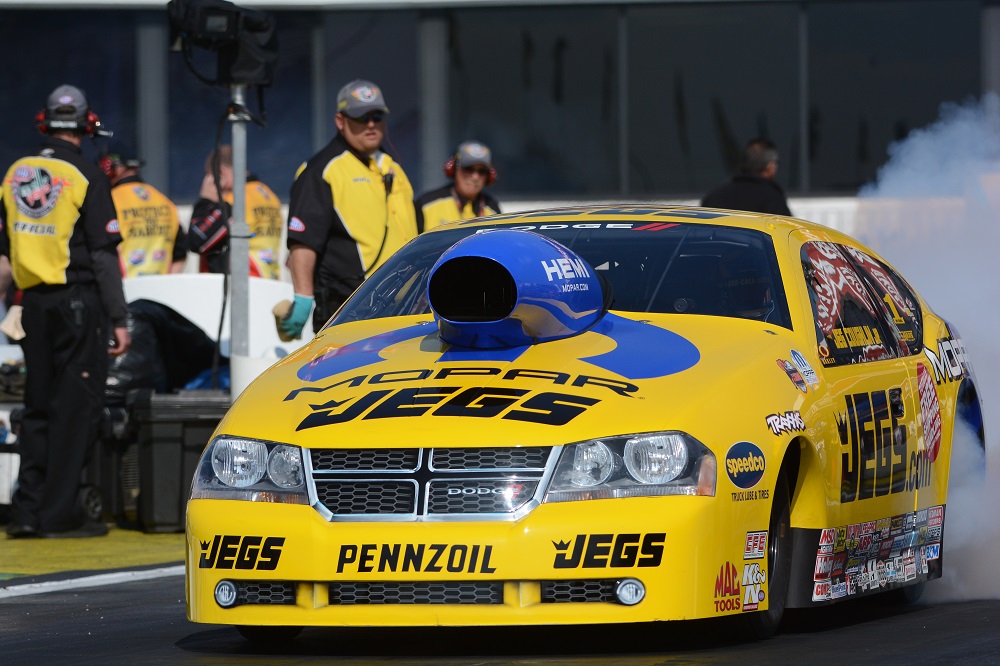 PHOENIX (Feb. 18) — Jeg Coughlin Jr. and his JEGS.com/Mopar Dodge Pro Stock team are ready to attack upgraded Wild Horse Pass Motorsports Park this weekend. The racetrack is now operated by Copper Train Development Partners in an agreement with the Gila River Indian Community, and numerous changes were made to the facility and the track.

"They've worked on it quite a bit to improve some of its imperfections. We've got up to 10,000-horsepower cars going down a concrete-and-asphalt lane, so any imperfection is very easily seen. It looks like they made some improvements there."

Coughlin was one of a handful of Pro Stock drivers to test on the new surface, but while the five-time champion believes it gives his JEGS team a good starting point, it's not a decisive advantage.

"We got a little bit of a feel for it, but it'll be all for naught," Coughlin said. "It's going to be 180 degrees different when we get back out there. The Safety Safari is going to be rubbing on it the whole week leading into the race, and it'll be more like it was in Pomona (Calif.). It will most likely be a very good track, and we'll just see how the improvements look after NHRA gets done working on it."

During the test, Coughlin and J&J Racing teammate Allen Johnson made a dual pass for media in attendance at a press conference, and he then met with several journalists from the area.

"We had a good test there and we got to meet a lot of media," Coughlin said. "They're really excited about the new management effort there. They've got a lot of motorsports activity going on there, from boats to cars to off-road trucks to different community events. It's one of those facilities that's really active, and we enjoy coming to the market. There's a lot of great fans who come from Colorado, New Mexico, Arizona, California. It's always fun to win there."

Coughlin is a two-time Pro Stock winner in Phoenix, but one of his best moments at the track happened 17 years ago in his Sportsman days.

"Probably my fondest memory was 1997, when we came into the race No. 2 in Comp points and needed to win the race to go back into the lead. We ended up winning the race, but that wasn't the end of it."

Coughlin didn't win the championship that year, but he has raced in plenty of pressure situations since then and is the defending Pro Stock champion. He went out in the second round in Pomona two weeks ago and would like to rebound with a better performance in Phoenix.

"My wife Samantha will be coming, so maybe that's what we need to get some good luck going," Coughlin said.

Qualifying sessions will be held at 2 and 4:30 p.m. on Friday and Saturday. Eliminations kick off at 11 a.m., Sunday. ESPN2 will air qualifying and elimination action.