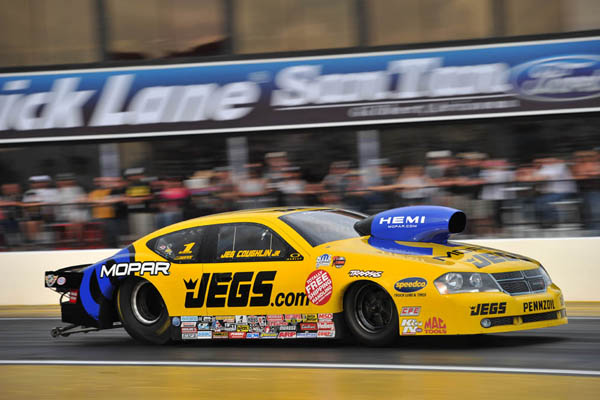 Coughlin squared off against Dave Connolly in ESPN's Marquee Matchup of round one of Pro Stock, but the race was over before Coughlin could get halfway down the track.

"It's kind of a tough run here at Phoenix," Coughlin said. "Coming off Pomona, we certainly had higher hopes with a second-round finish there."

But Coughlin's Avenger never found the sweet spot in Phoenix. He qualified No. 10 after a solid Saturday of qualifying, but the car didn't respond for eliminations.

"We really never got up with it," Coughlin said. "We just didn't run well on Friday, and we thought we came around a little bit Saturday. We moved up a little bit in the pack of cars running in the heat Saturday, but today, we just had a little bit more of the same as Friday."

Coughlin started well but his Dodge wiggled once, and he had to get out of the gas as he watched Connolly speed past.

"It was real, real close to being sporty, but it'd have been a tough run to beat," Coughlin said. "Dave was second-quick for the round and did a nice job."

Coughlin's confidence in his race team remains high, especially since he'll unveil a new race car for the Amalie Motor Oil NHRA Gatornationals on March 14-16 at Auto-Plus Raceway at Gainesville.

"We'll have our time for redemption I'm sure, sooner than not," Coughlin said. "We look forward to Gainesville. We're going to pull the tarp off of a brand-new car that all the folks at Mopar, Dodge and Chrysler are excited to show the world. That's going to be our new breath."