Coughlin keeps his cool after hot weekend in Memphis 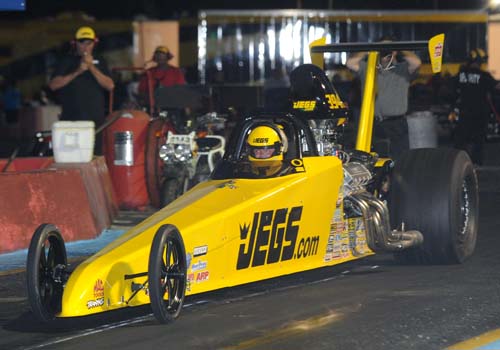 MEMPHIS, Tenn. (July 9) – With temperatures that hovering around 100 degrees, this weekend’s Dixie House Café Ironman $50K was not just a high stakes E.T. bracket race, but a test of survival.

The special event, which resumed at Memphis International Raceway this weekend after being postponed by rain in March, was shortened to a two-day race and in the $40,000-to-win main event, Troy Coughlin Jr. drove his JEGS.com dragster to a respectable finish, outlasting all but 10 cars.

"I won a few rounds but just couldn’t finish the job," Coughlin said. "I lost a really tough race. I had a .002-second reaction time but my opponent had a perfect .000 light and ran two-thousandths over his dial so I pretty much would have had to be perfect in order to beat him. In hindsight, there were a few things I might have done differently, but really, it was just a good close race and I came out on the wrong end of it.

"We didn’t start until 5:30 p.m. on Saturday because it was so hot. It was over 100 degrees and it felt even hotter than that until the sun went down. That’s why Sunday’s race was cancelled. It was tough, but we made the best of it."

During Friday’s $10,000-to-win warm-up event, Coughlin was in the hunt with his American Race Cars-built dragster, but ultimately lost in round three. Despite the losses, he maintains that his E.T. bracket racing program is continuing to progress.

"My car was very good this weekend and my worst reaction time was a .011," Coughlin said. "That part of it came together nicely. I just need to do a better job of sticking with my game plan, especially when it comes to driving the finish line. A little more discipline would go a long way."

Coughlin plans to get a lot more bracket racing practice this week as he’s planning to head for Beech Bend Raceway Park in Bowling Green, Ky., this weekend for the track’s popular Tenn-Tuck Series, a weekend event that includes six big money races. Coughlin will be joined by longtime friend and traveling companion Kenny Underwood.

"We really have a fun time in Bowling Green and that is always one of the best races of the year," Coughlin said. "And, I don’t think it will be 100 degrees either which makes me very happy."