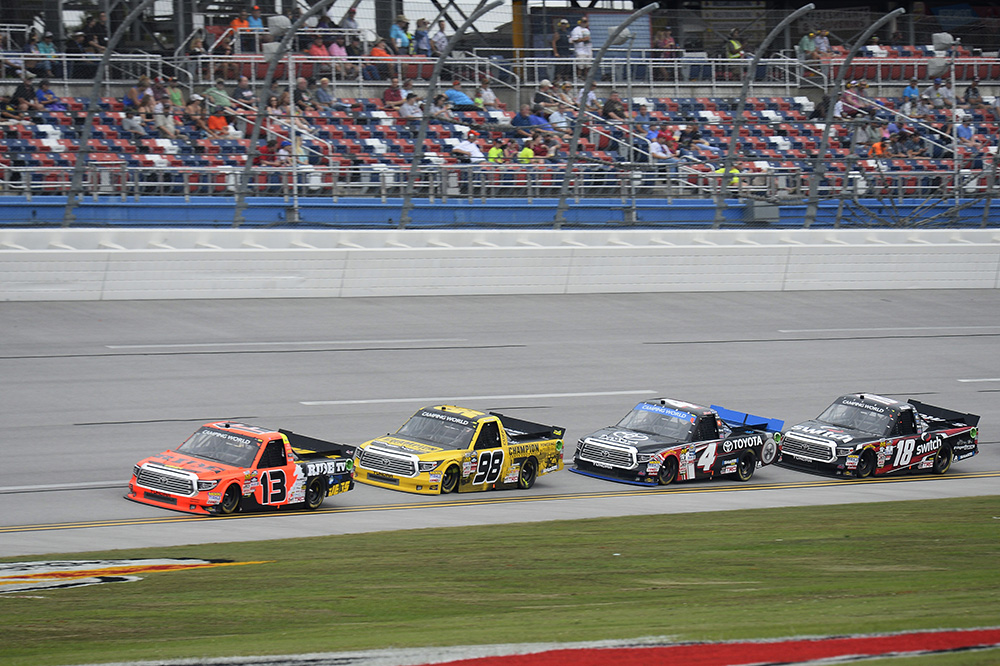 Cody Coughlin showed that he is a true contender for race wins in the NASCAR Camping World Truck Series in Saturday’s fred’s Pharmacy 250 at Talladega Superspeedway. Coughlin raced his way from the 18th starting position into the lead during the race’s final stage before getting caught up in a big crash with about 20 laps to go.

Coughlin led multiple laps on more than one occasion throughout Saturday’s 94-lap race. His day ended when he was caught up in a multi-truck crash in the tri-oval of the 2.66-mile superspeedway.

The Delaware, Ohio driver was on the bottom of a three-wide situation when the truck to his outside tagged Coughlin’s right-rear quarter-panel and sent him hard in the outside wall. Coughlin’s rear tires came off the ground before his RIDE TV/JEGS.com Toyota Tundra came back down on all four tires.

Coughlin climbed from his ThorSport Racing machine under his own power and was checked and released from the infield care center. Coughlin was credited with a 25th-place finish.

“I had a lot of fun running up front and leading laps. Unfortunately, we didn’t make it to the end and get the finish we deserved. I think we had a shot at the win. It was a big hit, but thankfully the good Lord kept me safe and I am okay. My guys at ThorSport Racing build really safe trucks and I’m thankful for that. We’ll head to Martinsville and try to get after it there.”

Coughlin’s next race is the Texas Roadhouse 200 at the half-mile oval of Martinsville Speedway in Virginia on Saturday, October 28th.