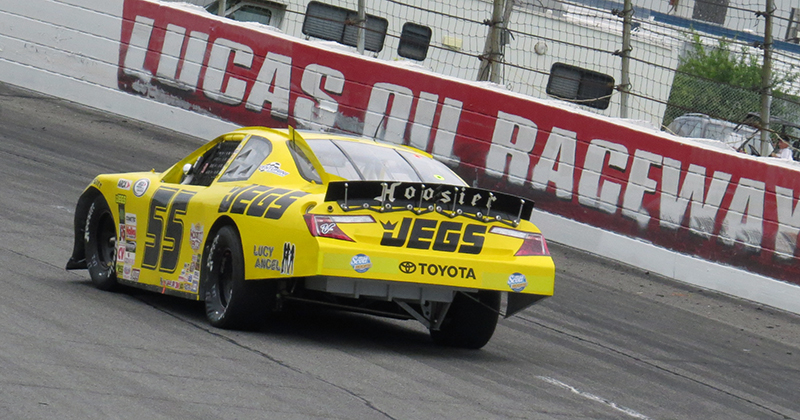 Like any other championship-winning athlete, 18-year-old Joe Gibbs Racing Development Driver Cody Coughlin demands a high level of performance each and every time steps into battle.  Friday night at Lucas Oil Raceway near Indianapolis, Indiana, Coughlin was dealt a hand that didn't allow for the kind of success he wants for himself or his JEGS.com No. 55 Toyota.

A mechanical failure and a trip into the wall early in practice for the SCOTT Get Geared Up 200 was a rough start to the day.  The Venturini Motorsports crew rolled out a backup No. 55 Toyota for second practice, but limited track time before qualifying led to a 16th-place starting spot for the 200-lap race.

Still, Coughlin wasn't about to let Lucas Oil Raceway get the best of him.  The 18-year-old raced into the top-10 during the first half of the main event.  He got as high as seventh late in the race before wrestling his car to the finish on the race's final set of tires to earn the 11th-place result.

"It's hard to be happy leaving with an 11th-place finish when I know we're capable of so much more, but I'm leaving here knowing that I gave it everything I had," said Coughlin, of Delaware, Ohio.  "We got behind early when the power steering belt came off and there was nothing I could do to keep the car out of the wall.  The backup car didn't quite have the same speed or handling in it that our primary car had and that kept us behind the eight-ball all day.

"We were able to pick up some spots as the race wore on and used some good tire strategy to get up into the top-10.  I really wanted to finish strong, but our last set of tires didn't cooperate."

Coughlin was quick to point out that while the result at Lucas Oil wasn't what he strived for and his Venturini Motorsports crew worked hard for, it was a finish that he can build from with the help and support of many involved with his racing efforts.

"I have to give a lot of credit to Team JEGS and all the guys at Venturini Motorsports who helped me get as strong of a finish as we could today," added Coughlin.  "With God on our side, we'll be able to regroup as a team and hopefully get back to running for the kind of finishes we deserve.

"We got to see our Joe Gibbs Racing teammate Kyle Busch take the JEGS.com Late Model to victory lane in his race before ours, which was pretty cool.  It was great having him give me some pointers on getting around Lucas Oil and I appreciate the kind words he and JGR's Steve deSouza gave me before the race.  Having their support, plus the support of my mom (Di), dad (John) and sister (Kennedi), is a true blessing."

Coughlin will now set his sights on getting things back on track when he returns to the seat of his JEGS.com No. 55 Toyota for Venturini Motorsports at Pocono Raceway on Friday, August 1.  The following day, Coughlin will be competing in the Bud St. Amant Memorial ARCA/CRA Super Series event at his hometown track, Columbus Motor Speedway in Ohio.