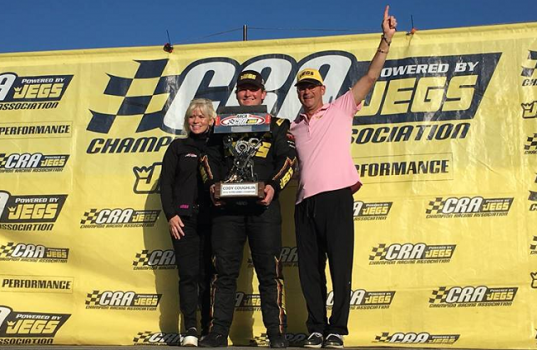 Cody Coughlin accomplished something during the 2016 racing season that had never been done before in the 18-year history of the Champions Racing Association (CRA).  The driver from Delaware, Ohio set out with a goal of winning both the ARCA/CRA Super Series and JEGS/CRA All-Stars Tour championships, and he accomplished that goal while making history this past weekend at Winchester Speedway (IN).
Coughlin joins a short list of drivers, including NASCAR Sprint Cup Series champion Tony Stewart, who have won multiple championships in a single season of competition.
S 51 TV Network red“I think that since the national ASA Tour shut down several years back, I would say that CRA has adopted the title of most prestigious and most competitive Late Model asphalt series in the country,” Coughlin told Speed51.com.  “To be able to do something that nobody else has done in that series is cool, definitely rewarding and hopefully it’s something that maybe years down the road when people look back that they can maybe relate it like something you just mentioned with Tony Stewart.  That would be my hope for it and I would assume that would be a while before someone does it again.  It took a lot of travel, a lot of prep and all that.  It’s very rewarding and I’m really happy about it.”
The challenges of winning two championships in one season go beyond just performing well behind the wheel of a race car.  It requires travel for driver and crew, double the preparation and double the work at the race track.  Coughlin was able to do this with a two-car fleet maintained by fellow racer and crew chief Jack Smith.
“The challenges of that is most people running Late Models don’t have a whole fleet of cars like the NASCAR teams do, us included.  We have two cars, so if you wreck them it becomes quite challenging running two series,” Coughlin explained.  “You have to swap motors and you have to do a lot of stuff.
“I’d say that is the biggest challenge, making sure you don’t put yourself in a bad position that you could have avoided potentially and then just keeping the energy levels up and keeping people on our team excited to go to the race track.  When you start to travel a lot it wears on you for sure, especially those guys that have to get there quite a bit earlier than me and stay up a lot later than I do working on the thing.  They did a great job and made my job a lot easier.”
In order to chase history, Coughlin and his supporters were forced to make the tough decision to forego a few of their NASCAR Camping World Truck Series starts with Kyle Busch Motorsports.  It’s a decision Coughlin told us he and the team at Joe Gibbs Racing (where he is a Development Driver) made to be able to contend for the duel CRA titles.
Moving forward, Coughlin’s focus will be shifted towards the higher levels of NASCAR as he attempts to climb the ladder towards the top.  That fact alone makes his accomplishment even more rewarding, knowing that he won two championships in what could be his final season of full-time Late Model competition.
“I was thinking about that the other day when I was on the stage collecting the trophies.  It’s probably going to be the last championship I get for a little while because, when you start going up in the NASCAR upper levels, there are obviously some veterans there that are going to take some time to beat,” Coughlin stated.  “Hopefully it’s not my last championship ever, but maybe the last in a year or two until I get my feet wet more in the NASCAR stuff.”
Making history in any facet of life takes hard work and more often than not teaches an individual a few life lessons.  Coughlin learned one major lesson with the championship on the line during the final race of the season at Winchester.
“Learning to not give up because I certainly felt like it at some points in the (Winchester) 400 when I got put in the fence and the motor was laying down on me,” he said.  “There were definitely a lot of bad things there; we ended up finishing and were able to win the championship just by finishing.  That just teaches you to never give up.”
Regardless of where Coughlin’s racing journey takes him from here, he will always be able to say that he was the first to do something.  He was the first driver to win both CRA championships, and that’s a feat that shouldn’t be taken lightly.
-By Brandon Paul, Speed51.com Editor – Twitter: @Brandon_Paul51
-Photo credit: Speed51.com