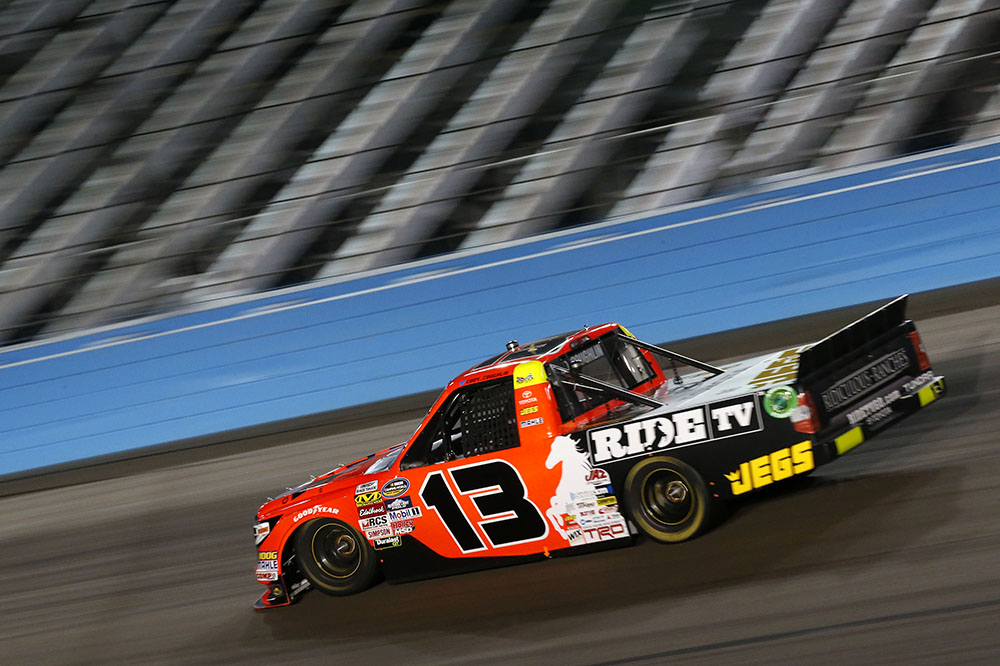 Progress.  It’s what every good race car driver uses as a measuring stick for their race team.  Cody Coughlin and the RIDE TV / JEGS.com No. 13 Toyota team for ThorSport Racing has battled through adversity many times this season, but it has never gotten them down.  And now, while riding a streak of momentum, Coughlin has scored his first podium finish of his NASCAR career.

Coughlin scored a third place finish, a new career-best in the NASCAR Camping World Truck Series, on Friday night in the Lucas Oil 150 at Phoenix Raceway.

It was certainly a survival of the fittest in the Valley of the Sun.  The 21 year-old missed three big crashes in the late stages of Friday’s race and found himself in a position to battle for his first career NCWTS victory with two laps remaining.

“The way it was going tonight you didn’t know if the top two guys would take each other out and we’d be in the cat bird’s seat,” said Coughlin.  “After qualifying and the beginning of the race I didn’t think we’d end up in the top five at all, so I’m really proud of the adjustments the guys made to our Toyota Tundra. Everybody on the RIDE TV/JEGS.com Toyota worked great, and with our first top-five we are now looking forward to the finale in Homestead.”

The Delaware, Ohio native battled a tight handling race truck all day long. His crew, led by interim crew chief Rich Lushes, made a variety of changes to Coughlin’s machine to improve his handling.

After the race, Coughlin said he was extremely happy with the communication between everybody throughout the day.

“Rich did a great job.  He called the right shots to put us in position to win the race and I couldn’t be more thankful for that.  We all worked really well together today. From my crew guys to Terry Cook (spotter) helping me miss those wrecks, it was a total team effort. I’m very proud of what we accomplished today. Maybe next week it’ll be two spots better.

“I’m very thankful for the opportunity that Duke and Rhonda Thorson has given me to drive their trucks at ThorSport Racing. God kept me safe and out of those wrecks and I’m thankful that everyone was ok as well.  My Mom (Di) and Dad (John), plus Kennedi (sister) have such an important part in all of this as well.  I’m really happy for everyone at JEGS.com and RIDE TV to get the finish we deserve.”

Prior to this podium finish, the Ohio native led laps at Talladega and finished sixth at Las Vegas Motor Speedway (his previous best finish).

Coughlin has one race remaining on his 2017 NASCAR Camping World Truck Series calendar. The season will conclude on Friday, November 17th at the 1.5-mile oval of Homestead-Miami Speedway in Homestead, Florida. It will be Coughlin’s first trip to the facility.