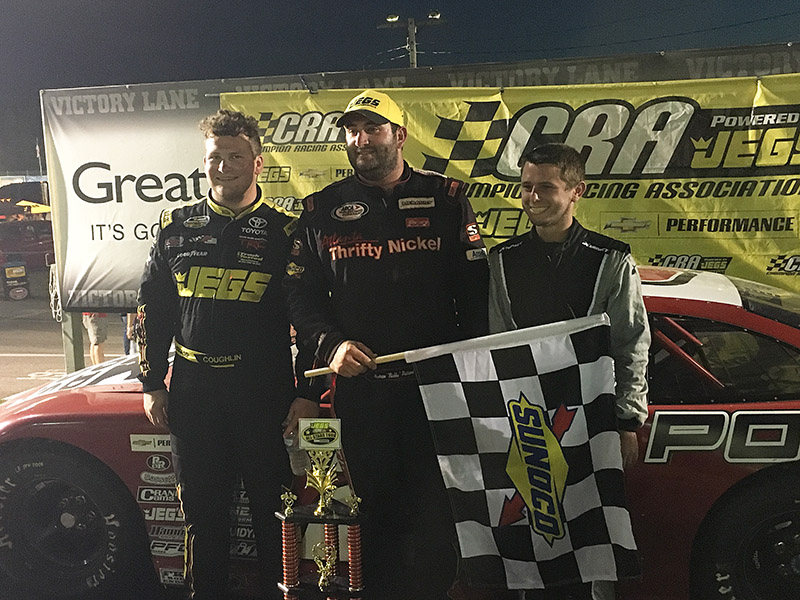 After scoring a top-12 finish on Friday night at Texas Motor Speedway in the NASCAR Camping World Truck Series, Cody Coughlin flew to Marne, Michigan to finish second in the JEGS/CRA All-Stars Tour 100 at Berlin Raceway after starting seventh.

“I wish we could have won, but a second-place is always a good result, especially at a tough race track like Berlin,” said Coughlin, who is a Joe Gibbs Racing Development Driver.  “I’m pretty happy to come here and do that after last night’s good run at Texas.”

Coughlin qualified third, but started seventh after the invert.  He methodically worked his way by his competitors and into the top two.

As Coughlin made his moves, he was still saving his tires almost all race long at the guidance of his spotter, Scott Wimmer.

“Scott did a great job on the roof tonight,” said the 20 year-old.  “He and Kevin (Hamlin, team manager) came up with a great strategy and it almost worked out perfectly.  We just came up one spot short.”

Saturday night’s race was a perfect test session for the main event, Monday night’s ARCA/CRA Super Series Battle at Berlin 251.  Coughlin will be running the same car on Monday that he ran tonight.

“Our goal in running tonight was to learn for Monday night,” Coughlin said.  “That’s the big race, and that’s the one we really want.  We learned a lot tonight, and I think we’ll have a great shot on Monday night.”

“That’s really cool to be the dual points leader,” said Coughlin, who also drives for Kyle Busch Motorsports on the NASCAR Camping World Truck Series.  “I couldn’t do any of that without Jack (Smith, crew chief), Kevin, Scott, and Dave (Holt, crew member).  And of course, none of this would be possible without the love and support from my parents, Di and John, and my sister, Kennedi.  The Lord has really blessed me and this race team.”