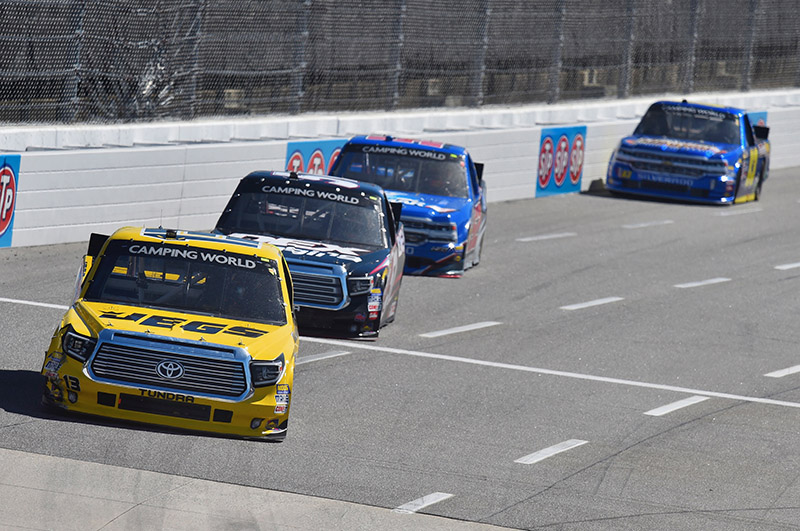 Fans at Martinsville Speedway departed the track affectionately known as “The Paperclip” talking about several things from the NASCAR Camping World Truck Series springtime event.  One of those water-cooler type discussions will involve a fantastic performance by Cody Coughlin.

The driver of the No. 13 JEGS Performance Toyota Tundra for ThorSport Racing rebounded Saturday from a 27th starting spot, a pit-road miscue and being two laps down, to knock on the door for a top-10 finish in the closing laps of the Alpha Energy Solutions 250.

The aggressive nature of another driver, in the third turn of the final lap, spoiled what was an unbelievable comeback for the 21 year-old Coughlin.

“I got run over (on the last lap), that’s about it,” explained Coughlin of the contact with fellow rookie Chase Briscoe.

Coughlin was credited with a 19th place finish in the 250-lap race, which began with a spin and then a wrench being left aboard the truck.  The combination of both put Coughlin two-laps down to the leaders.

Never giving up, the team and Coughlin himself fought valiantly and got back on the lead lap.  In fact, Coughlin was in the top-10 late in the race, his first at the southern Virginia racetrack.

“It was rough out there.  It’s tough to pass because there’s so many slower cars and nowhere to go at this track,” explained Coughlin of his first visit to Martinsville Speedway.  “We’re all working hard and my team did a great job.  We just have to unload off the trailer a little better and qualify little better and we will.  We all hung in there today and had a good finish until the day came to an abrupt end when we were taken out on the last lap.”

Up until that contact, Coughlin was the “Hard Charger” of the race.  He had gained 16 spots from his original starting spot.

“The guys never gave up.  Terry (Cook, spotter – former NCWTS winner) kept me aware of things on the track and Michael (Shelton) and Rich (Lushes) calculated every move we made.  This team is capable of better finishes and with a couple of improvement for all of us, we’ll be right there.  I’m blessed to be in this position and it was nice to have my whole family with me at Martinsville as well. I also can’t thank Duke and Rhonda Thorson enough for giving me the chance to race their trucks.”

Coughlin now has more than a month until his next NASCAR start.  He and the ThorSport Racing team will compete in the Toyota Tundra 250 for the NASCAR Camping World Truck Series on Friday, May 12th at Kansas Speedway.

To stay focused, Coughlin and his Team JEGS Late Model crew is scheduled to compete in the Spring 200 event with the ARCA / CRA Super Series on Saturday, April 22nd at Toledo Speedway in Ohio.