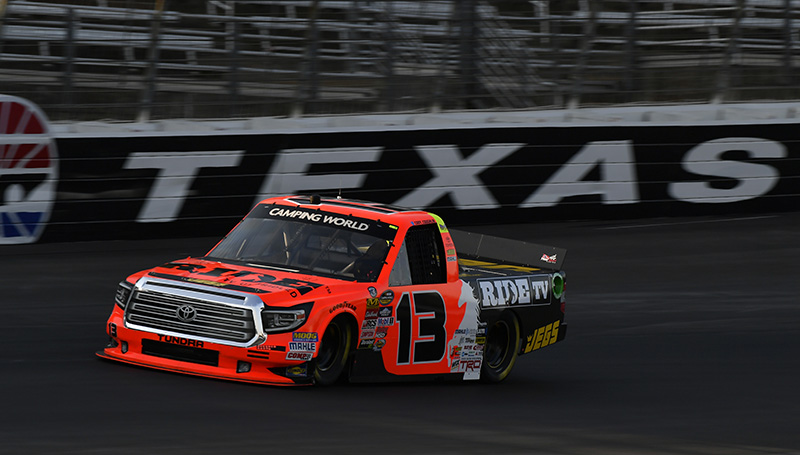 For much of Friday night’s WinstarOnlineGaming.com 400 Cody Coughlin was showing why he considers Texas Motor Speedway to be one of his favorite race tracks. He showed in the top 10 for much of the race and scored his first stage point of the season before his engine expired with 10 laps to go.

Coughlin had a strong qualifying effort that saw him make the second round of qualifying. He started 11th in his RIDE TV/JEGS.com Toyota Tundra for ThorSport Racing and finished 18th after his engine let go due to an overheating issue caused by debris.

The 21-year-old driver had grass fly onto the grill of his truck after the driver ahead of him drove off the pavement. The oil and water temperatures rose too high and that lead to the engine failure while Coughlin was challenging for a top-10 finish.

“It’s a real shame because once again we had a great race going and we don’t have really anything to show for it,” said Coughlin.  “The luck we’re having is keeping us from getting the results we deserve.  My guys work really hard to give me a great Toyota Tundra every time we go to a race track. We’ll get the right results soon.”

The Delaware, Ohio native will be back in the truck next Saturday night, June 17th at Gateway Motorsports Park in St. Louis, Missouri for the Gateway 200.