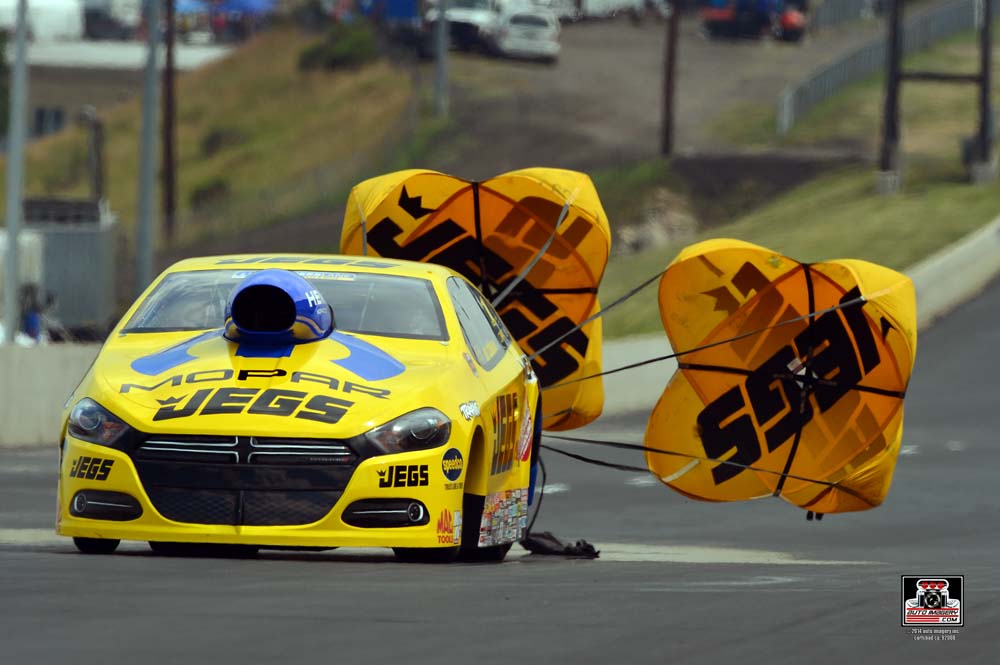 DENVER (July 20) – Though Pro Stock champion Jeg Coughlin Jr. was disappointed by losing in the final round of the Mopar Mile-High NHRA Nationals on Sunday at Bandimere Speedway to teammate Allen Johnson, he was thrilled with the performance of his JEGS.com/Mopar Dodge team.

Coughlin, crew chiefs Adam Hornberger and Mark Ingersoll, engine builder Roy Johnson and the entire team bounced back from a difficult Friday, when Coughlin was left outside the top 12.

But Coughlin was able to race all the way to the final round before a .004-second red light handed the win to J&J Racing teammate Johnson.

"My weekend didn't start out quite like we had planned on my car," Coughlin said. "But they were waving the wand on it Friday night and Saturday morning and got my car to come to life, which was great. We were second and third for the sessions on Saturday and they moved us up to No. 4, and we had a great race car. That's all you can ask for."

That put him in a tough second-round race with four-time champion Greg Anderson, but five-time champ Coughlin was up to the task. Anderson had a .011-second reaction time, but Coughlin was even better, .007. Coughlin's Dodge Dart was better, too, at 6.944 seconds at 198.44 mph to Anderson's 6.971-second pass at 197.65 mph.

In the final. Coughlin tripped the Christmas Tree .004 seconds too soon.

"I drove really well and got aggressive later in the day," Coughlin said. "I guess I get relaxed, and it's more natural to me. I'm used to bracket racing a lot and I haven't done any of that lately. That's where you run a lot of rounds in one day and it kind of lets your body do its thing.

"Lately I think I've been on the edge of too aggressive and then couple that with getting more comfortable as the day goes on."

Still, Coughlin was pleased at racing to the final round and solidifying his hold on third place in the Pro Stock points standings.

"I'm really happy where we started with these cars on Friday to where we ended up on the mountain, one-two," Coughlin said. "It's just what the doctor ordered. We are headed to the winner's circle right now to celebrate."