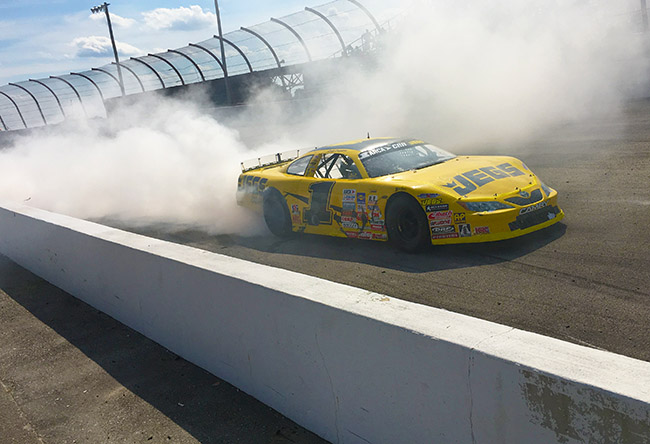 Cody Coughlin walked into Winchester Speedway on a mission.  As he chases two Champion Racing Association championships, he kept saying he wasn’t thinking about points; instead he just wanted to win.  The Joe Gibbs Racing Development Driver is leaving Winchester knowing that his mission is accomplished.

Coughlin proved he would be the car to beat when he set fast time in qualifying on Sunday afternoon for the ARCA / CRA Super Series.

On Monday, the 20 year-old backed up his qualifying performance by quickly moving into the top three after starting sixth due to the inversion of the top qualifiers.   After he moved into a podium position, Coughlin exercised a lot of patience by hanging around in his position, rather than pushing the issue too early.

The Ohio native’s toughest battle for much of the race involved restarts.  Every time a caution came out it seemed he was on the bottom lane, but that actually proved to be a good thing when it mattered most.

On the penultimate restart, Coughlin found himself in the second spot, first on the inside lane.  Coughlin got a great jump and muscled his way by the leader to move into the top spot with 32 laps to go.

“All day it seemed like we were on the bottom for those restarts, and we had a lot of them,” said Coughlin, who is competing part-time in the NASCAR Camping World Truck Series for Kyle Busch Motorsports this year.  “On that final restart I just made sure I got the best restart I could and it worked out.”

Cody Coughlin the drove away from the field on the final restart and won for the second time at Winchester, this time by almost a straightaway over second-place.

“This one was definitely harder than the first time we won here,” explained Coughlin.  “Last time we started first, finished first and led every lap.  This time we had to come through the field and make passes and be patient.  This one was also more fun.”

“I truly wasn’t thinking about points when we came here,” he said.  “I just wanted to win.  That’s what I want to do every week, and I think we can do that here again in the 400, and I know we’ll be good at Lucas Oil Raceway too.”

The driver of the Number-1 JEGS.com Toyota Camry now has six total wins in Late Model competition this year; four of those victories have come in the ARCA / CRA Super Series.

Coughin also ran the JEGS/CRA All-Stars Tour event on Sunday night, but his evening ended prematurely due to a broken right-front wheel.  He still leads the standings in each series.

“Overall it as a very good weekend.  I wanted to win both races, but we got the win in the race that really mattered, and that was Monday’s race.

“I just can’t thank my guys enough.  Jack (Smith, crew chief), Kevin (Hamlin, team manager), Scott (Wimmer, spotter), and Dave (Holt, crew member) put so much effort in this weekend on both race cars and their hard work showed with a win.  I also can’t thank my family enough for all of their support.  My parents (Di and John) are the best parents anyone could ask for, and even though my sister, Kennedi, couldn’t make it this weekend, she’s still my biggest fan and supporter. God truly blessed me with a great family.”