Coughlin Ready for First Battle in Valley of the Sun 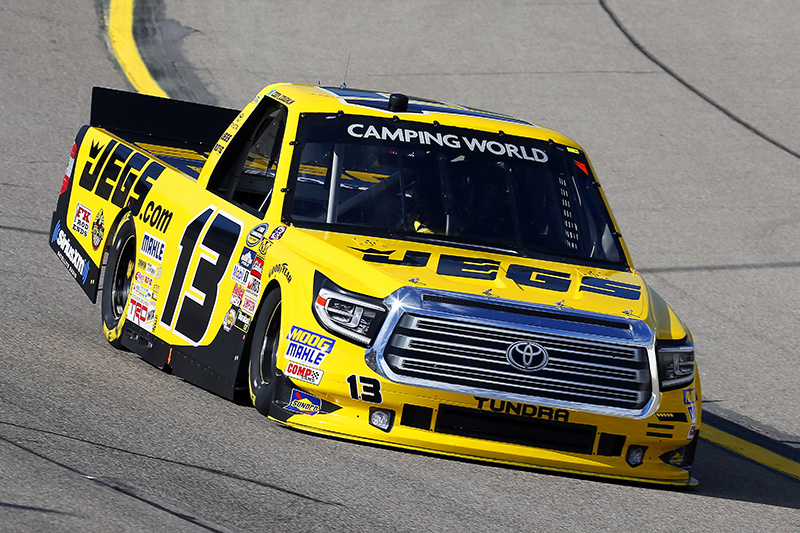 For the first time in Cody Coughlin’s career, he’ll be racing in the Valley of the Sun, and he’ll be doing so with positive momentum on his side. After scoring strong finishes in recent races, including a career-best of sixth at Las Vegas Motor Speedway, Coughlin and his JEGS.com/RIDE TV team at ThorSport Racing are ready to head west again to race the NASCAR Camping World Truck Series Lucas Oil 150 at Phoenix International Raceway on Friday night.

While Coughlin has never raced at the one-mile triangle in Avondale, Arizona, Coughlin is confident that he’ll know just what to expect out of the tricky track before he arrives in the desert.

“My spotter, Terry Cook, does a great job helping me prepare for each track we go to, especially the new ones,” said Coughlin.  “I’ll study the notes that he usually gives me and we’ll go from there and hopefully be strong right off the truck on Friday.”

Coughlin and his team have been strong as of late, in fact, he led laps at Talladega Superspeedway a couple races ago. The 21-year-old driver said he feels like they’re in the process of ending the 2017 season on a high note.

“It’s definitely the right way to close the year out. We’ve shown good speed at most of the races this year, but we’d have trouble getting the finishes to show it. Our luck has not matched our performance, but our plan is to fight hard like we have all year long and hopefully get strong finishes at Phoenix and Homestead to end the year.”

Coughlin’s race weekend is actually just a race day in Phoenix as it is a one-day show this weekend. Coughlin’s day will begin with a one hour and 50-minute practice session at 9 a.m. MT. Pole qualifying will take place at 3:30 p.m. MT with the green flag set to follow at 6:30 p.m. MT/8:30 p.m. ET.

Race fans hoping to meet Cody Coughlin can do so at the NASCAR Camping World Truck Series autograph session from 1 – 1:45 p.m. on Friday.