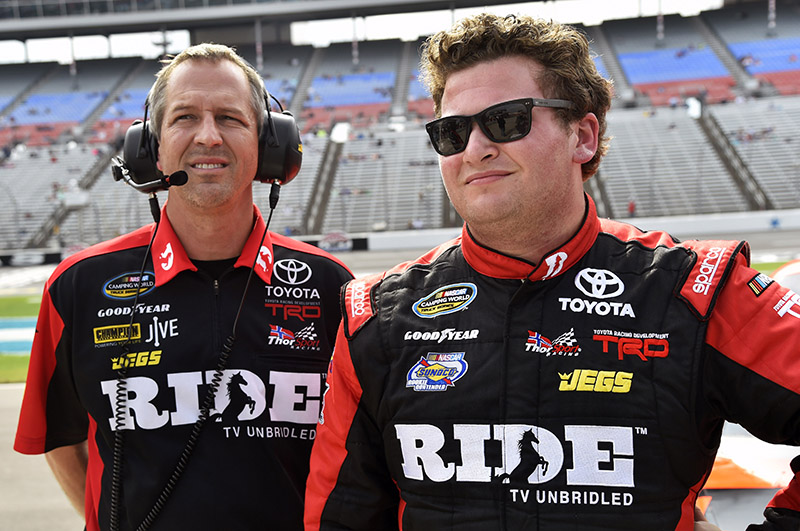 Cody Coughlin will visit the Gateway to the West this weekend when he makes his first start at Missouri’s Gateway Motorsports Park for the NASCAR Camping World Truck Series Drivin’ for Linemen 200.  Coughlin will pilot the No. 13 JEGS.com/RIDE TV Toyota Tundra for ThorSport Racing in the 160-lap race on Saturday, June 17th.

To prepare for his first start at the 1.25-mile oval in St. Louis, Coughlin and his team tested for two days at the facility, located just outside of St. Louis, MO, in May.

“I’m excited about going to Gateway this weekend,” said Coughlin.  “We tested there last month and I believe we have a good direction on what we need to do to be faster. We’ve had speed all year, and it’s time to close out the deal and get it done on Saturday.

The 21-year-old driver has certainly shown speed at every race this season. Coughlin ran in the top 10 for much of his last race at Texas Motor Speedway before his engine expired with about 13 laps remaining.

“I was at the ThorSport Racing shop this week and the entire team is pumped,” said Coughlin.  “Texas was disappointing, but it was out of our control.  We learned a lot at Texas and we were definitely fast. Duke and Rhonda Thorson give us great Toyota Tundras to race.  There were many positives to take away from Texas, so we’ll just move forward and hope we get the finish we deserve on Saturday at Gateway.”

This weekend’s race at Gateway is the first single-day show of the season for the NASCAR Camping World Truck Series, meaning Coughlin will practice, qualify and race all in the same day.

Saturday’s 160-lap/200-mile race will be broken down into three stages. The first two stages will be 35 laps each with a final stage length of 90 laps.