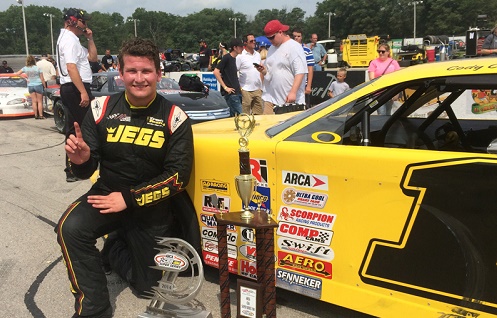 Cody Coughlin is headed back to his happy place this weekend when he takes on the 37-degree banking of Indiana's Winchester Speedway for the ARCA/CRA Super Series World Stock Car Festival 100 on Labor Day Monday.

Winchester normally intimidates drivers.  It's fast; the banking is as steep as it gets and there's even a sign at the pit gate that reads "Through these gates, pass the bravest drivers in the world."

But Winchester does not intimidate the 19-year-old from Delaware, Ohio.  Coughlin loves heading to Winchester.  He's run strong there in the past, and is the defending winner of this race.  As a result, it's one of his favorite race tracks.

"It ranks pretty high up on my list," said the Joe Gibbs Racing development driver.  "Obviously because of the win, but also the history there.  Some of my favorite drivers have raced and won there, so that makes this place even more special."

Often times drivers feel pressure to duplicate a past performance, especially one such as Coughlin's in 2014 when he led all 100 laps en route to the win.  However, Coughlin is as cool as can be heading into this weekend's racing action.

"I'm not feeling any pressure," he said.  "I just hope to be able to pull off a similar performance with the same result, and I definitely feel that we can.

"I'm really just so thankful that the good Lord enables me to do what I do, and that my parents (John and Di) and Kennedi (sister) support me so much.  I have a great crew, from Nick Easton (crew chief) to Scott Wimmer (spotter) Kevin Hamlin (team manager) and Dave Holt.  They work so hard to give me fast cars each and every race.  I can't wait to race that car at Winchester again."