Coughlin Ready to Duel with a Monster in Delaware 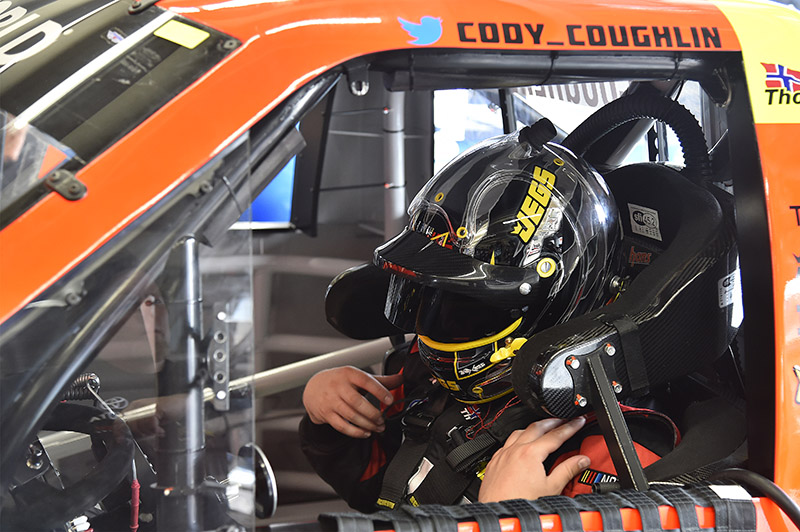 Throughout history there have been many tales told about normal men facing off against giant beasts and being victorious. On Friday night (June 2), Cody Coughlin has a chance to write his own tale about the time he faced the Monster and conquered it.  That’s when the 21 year-old will take on the Monster Mile of Dover International (DE) Speedway while driving the No. 13 JEGS.com / RIDE TV Toyota Tundra for ThorSport Racing in the Bar Harbor 200 presented by Sea Watch Int’l for the NASCAR Camping World Truck Series.

This weekend’s trip to Dover, the capital of Delaware, the first state in the Union, will be Coughlin’s first to the fast, one-mile concrete oval.

“I’ve never been to Dover, but I’ve heard it’s a fun place once you get the hang of it. It seems like a different track for sure, but I’ve done well on the high-banked short tracks like a Winchester.  Dover is definitely a faster one, so it’ll take a few laps to get used to it, but I’m up for the challenge.”

After a strong run at the Charlotte Motor Speedway two weeks ago that saw Coughlin race in the top 10 for much of the night, Coughlin now is feeling like he has positive momentum on his side.

“We’re definitely making gains. We just haven’t been getting the results yet that I feel we deserve. Hopefully we can put the JEGS.com Toyota Tundra up front on Friday and I can give my guys and Duke and Rhonda Thorson a run they deserve for believing in me.”

Friday, June 2 is Bar Harbor 200 race day at Dover International Speedway.  Coughlin will first qualify at 2:35 p.m. ET. Qualifying will be a three-round, knockout qualifying format this week.  The green flag for the Bar Harbor 200 will wave at approximately 5:30 p.m. ET on Friday night.

Fans will have the chance to meet Cody Coughlin on Friday at the NASCAR Camping World Truck Series autograph session from 12:30 p.m. ET to 1:15 p.m.