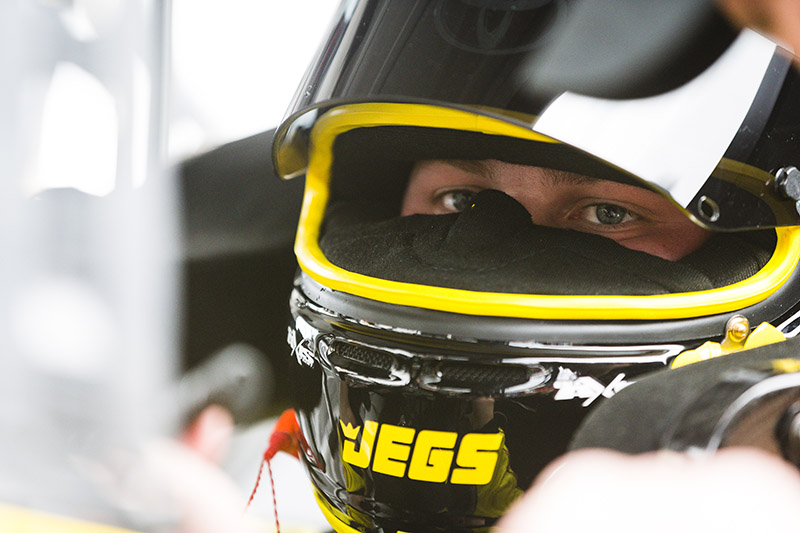 Cody Coughlin is already off to a strong start in 2017, scoring a career-best finish in last weekend’s race at Daytona International Speedway (FL) to open this season’s campaign.  Now Ohio native is off to Atlanta to take on the ultra-fast 1.5-mile D-shaped oval of Atlanta Motor Speedway in Georgia for the first time in his budding career.   Coughlin will drive the JEGS.com No. 13 Toyota Tundra for ThorSport Racing in Saturday’s (March 4) Active Pest Control 200 with the NASCAR Camping World Truck Series.

The 21-year-old driver has raced on multiple intermediate tracks prior to this weekend, but this will be his first race at Atlanta Motor Speedway.  Coughlin, however, does have some prior experience at “Hot-Lanta.”  He participated in a rookie driver test session last season.

“Even though it was a over a year ago, I think that test session will definitely help me this weekend,” Coughlin said.  “I have some knowledge to lean on heading into this weekend, and that is always good.  Anytime you can be on a track for a substantial amount of time before you race is always a big help.”

Saturday will be the first intermediate race of the season under the new “Stage” format NASCAR is using in 2017 and beyond in all three of NASCAR’s national divisions.  Last weekend’s race at Daytona was a wild one, and some attributed that to the new segment format.  Coughlin said he expects more of the same this weekend in Atlanta.

“I think the stages have shown in the top three series this past weekend in Daytona that us drivers want to get those bonus points, so I would expect to see some aggression again,” explained Coughlin, a Joe Gibbs Racing Development Driver.  “Hopefully it won’t be as aggressive as Daytona, but if it is, I just hope that our JEGS.com Toyota Tundra won’t be involved in any of it and we can have a strong solid day.  I know my team at ThorSport Racing will give me a great Toyota Tundra.”

Coughlin’s ThorSport team is led by crew chief Michael Shelton.  He will be calling the shots from atop the pit box and spotter Terry Cook will be guiding the up-and-coming racer from high above the racetrack.

“It was great working with Michael and Terry and all of the guys this past weekend in Daytona.  I feel like our communication was really good and it’s only going to get better as the season goes on.  I know Michael will give me a great Tundra to drive, so hopefully I can get us a good result to make him, the rest of the team and Duke and Rhonda proud.  God has blessed me with a great opportunity this year and I’m ready to use it to help this team continue its success.”

Coughlin will hit the track for the first time this weekend on Friday, March 3 for three practice sessions.  The first session will start at 11 a.m. ET.  The second practice session begins at 2:30 p.m. and final practice will go green at 4:30 p.m.

Saturday, March 4 is Active Pest Control 200 race day.  Coughlin’s day will begin with an autograph session at the track at 9:00 a.m. ET.  Pole qualifying for the NASCAR Camping World Truck Series is up next at 10:40 a.m.  Driver introductions will take place at 4 p.m. with the green flag to follow 4:30 p.m. ET.