Coughlin Ridin’ Upfront at Kansas, Knocking on Door of Top 10 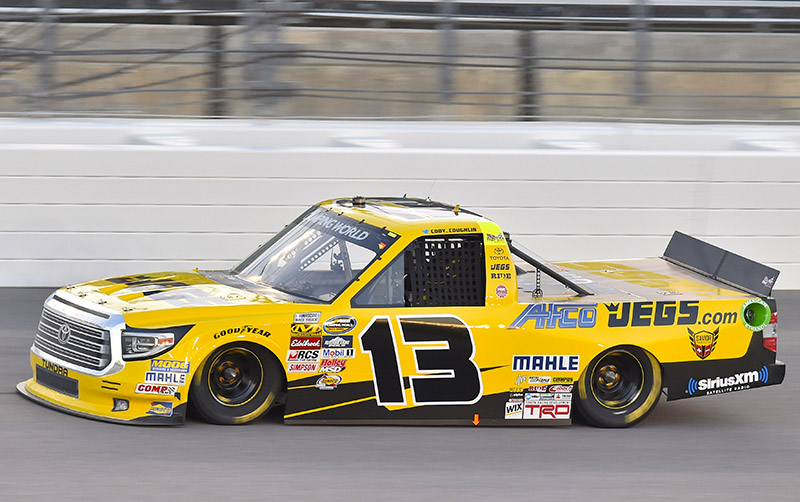 Cody Coughlin was knocking on the door of his first top-10 finish in the NASCAR Camping World Truck Series during Friday night’s Toyota Tundra 250 at Kansas Speedway, but a transmission issue left Coughlin with a 26th-place finish.

Near the end of a caution-filled first segment, the 21-year-old driver found himself just outside of the top 10 on a restart. When the green flag waved Coughlin tried to shift from second gear to third gear, but the shifter wouldn’t budge.

Coughlin brought his No. 13 JEGS.com/RIDE TV ThorSport Racing Toyota Tundra to the garage where his team quickly changed transmissions.

The Delaware, Ohio native and his team used the rest of the race as a test session for next week’s race at Charlotte Motor Speedway.

"We were definitely fast tonight and then something happened on that restart and it wouldn't get out of second gear. It's a shame because I think we had a really good truck tonight. My guys worked really hard to change the transmission and then we just used the rest of the race to learn some things for Charlotte and the rest of the mile and a half tracks.

“I just have to thank Duke and Rhonda Thorson for the priviledge of driving their trucks, as well as my crew chief Michael (Shelton) and the rest of my crew for always giving me a fast truck.  We didn’t get the finish that they deserved tonight.  We’ll just move on to Charlotte and try again there.”

Coughlin’s next NASCAR Camping World Truck Series race will be at the Charlotte Motor Speedway in Concord, North Carolina on Friday, May 19.