Coughlin Scores a Hat-trick With Win at Baer Field 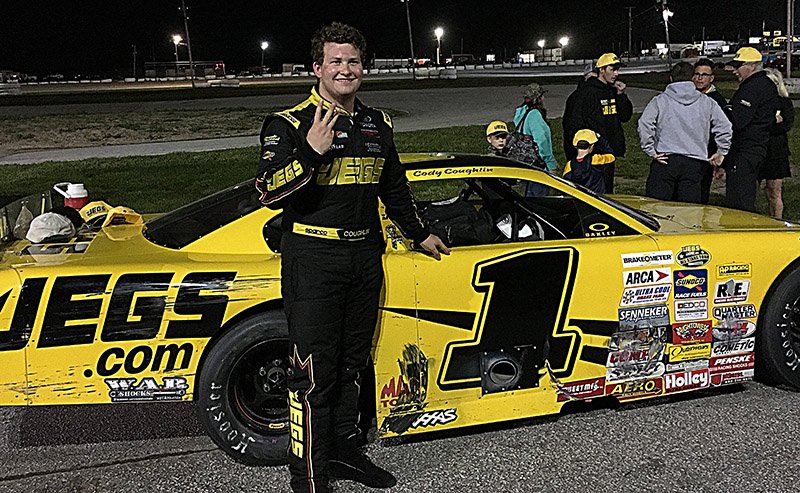 When someone scores three goals in a hockey game, fans litter the ice with their hats.  It’s known as the “hat-trick.”  While nobody threw their hats onto the racing surface at Indiana’s Baer Field Motorsports Park on Saturday, Cody Coughlin scored himself a hat-trick with his third consecutive ARCA/CRA Super Series victory in a row.  It’s a feat that is rare in racing.

The Joe Gibbs Racing Development driver had to work extremely hard for this one as he started in the ninth position in his No. 1 JEGS.com Toyota Camry and had to chase down the leaders from a deficit of more than six seconds.

Coughlin was told throughout the race by his crew chief, Jack Smith, and his spotter, Scott Wimmer, to be easy on his tires and the leaders would come to him.  That’s exactly what Coughlin did and that’s exactly what happened.

The Delaware, Ohio native cut down the large gap in just 15 laps to move into second-place.  A caution with about 20 laps to go set up a shootout for the win and Coughlin was able to capitalize.

“This feels great,” said Coughlin.  “I really had to earn this one.  This one was tough.  Terry Fisher and Scott Hantz were really good and it was a struggle to get around them.  It was definitely challenging, but that makes it so much more rewarding.”

By virtue of another win, Coughlin’s points lead continues to grow as he cements himself as the frontrunner for the ARCA/CRA Super Series championship.

“We’re getting good results, and winning lets it take care of itself,” said Coughlin.  “If we do this more often then the points will keep coming.

“I just really have to thank my crew for giving me another awesome race car and keeping me calm,” said Coughlin, who also competes in the NASCAR Camping World Truck Series with Kyle Busch Motorsports.  “Working with Jack this year has been awesome.  Scott keeps calling great races, and Kevin (Hamlin, team manager) and Dave (Holt, crew member) have been working extremely hard as well.  The Lord has blessed us all.  Of course, none of this would be possible without the love and support from my parents, Di and John, and the support from my little sister, Kennedi.  I’ve been really blessed to have such a great family.  I also really want to thank Betsy Meyer for her support.  She’s real close with Jack and she’s been in the hospital recently and I just wanted to let her know that we’re all thinking about her.”

Coughlin’s next race is a JEGS / CRA All-Stars Tour Pro Late Model event on Saturday, May 28 at his home track of Columbus Motor Speedway in Columbus, Ohio, just a few minutes away from his house in Delaware.