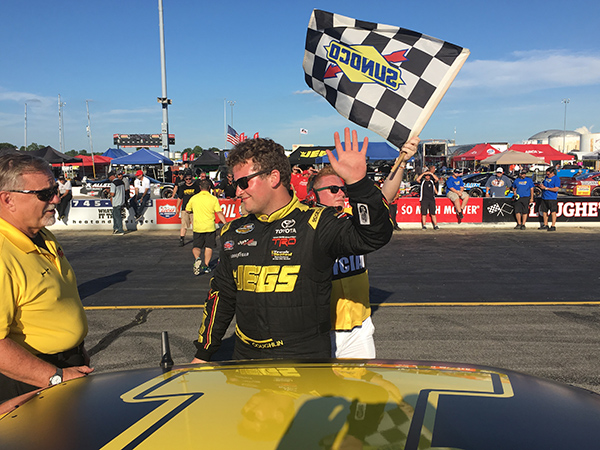 Coughlin battled a loose race car, a greasy race track, and extremely hot temperatures on his way to his seventh top 10 finish of the season.

The Delaware, Ohio native’s seventh-place finish also was better than that of the driver chasing him the points, which helped Coughlin widen points lead.

“Another top-10 is good, and increasing the points gap is even better,” Coughlin said.  “The goal this year is to win the championship and a run like this helps us do that. We made some good passes, even while battling a loose car and the bright sun, so it was still a good day.”

Coughlin’s marathon week of four races in seven days is coming to an end on Saturday, July 22 with the JEGS/CRA All-Stars Tour Pro Late Model feature at Anderson Speedway in Indiana, the same place his week began.

The Joe Gibbs Racing Development driver scored a win in the Super Late Model at Anderson back in May, and is now searching for a second win on the high-banked quarter-mile, but this time in the Pro Late Model.

“I really want to add Anderson to the list of tracks that I’ve won at multiple times, and I know that we’ll have a great chance to do it on Saturday,” said Coughlin.  “I know that Jack (Smith, crew chief), Kevin (Hamlin, team manager), Scott (Wimmer, spotter), and Dave (Holt, crew member) will give me another great race car.  Hopefully my mom and dad (Di and John), Kennedi (sister) and all of us can take a picture in victory lane.”

Coughlin will hit the track on Saturday for practice beginning at 4:30 p.m. ET. Qualifying will take place at 6:30 with the Pic-A-Part 100 to begin at approximately 9 p.m. ET.