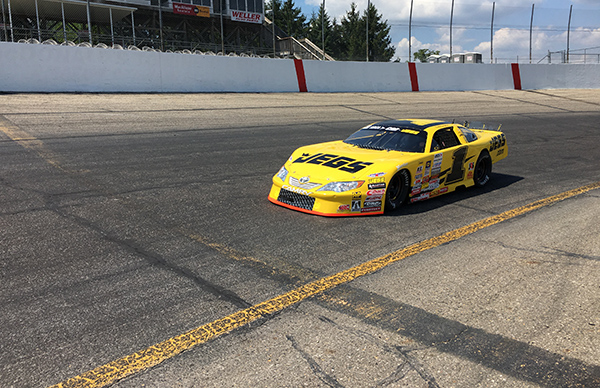 Cody Coughlin fought hard in Wednesday night’s Kalamazoo Klash 125 for the ARCA/CRA Super Series at Kalamazoo Speedway.  He battled in traffic throughout the race and came home sixth in his inaugural start at the fast and challenging 3/8-mile Michigan oval.

Coughlin qualified seventh and started third after an invert of nine.  He ran in the top five for much of the race, and was at one point as high as second.

However, with under 50 laps to go, Coughlin was hit from behind and moved out of the racing groove.  The 20-year-old Joe Gibbs Racing Development driver went for a slide, but kept his JEGS.com Toyota Camry from going for a spin.  When Coughlin regrouped, he found himself in sixth.

“I don’t know why that guy felt the need to hit me and move me, but we held onto it and still got a good finish,” said Coughlin.  “That was the important thing, getting a good finish because we finished higher than the guy chasing us in points tonight.”

The Delaware, Ohio native extended his points lead in the ARCA/CRA Super Series as those chasing him all finished behind him.

“I’m trying to not look too far ahead, but I really think we can get this done,” said Coughlin, who also leads the JEGS/CRA All-Stars Tour points standings.  “We’re getting closer and closer to both of those championships, and that would be really cool.

“I just can’t thank everyone enough who has a hand in this deal.  My team from the top down is awesome.  Jack (Smith, crew chief), Kevin (Hamlin, team manager), Scott (Wimmer, spotter), and Dave (Holt, crew member) have done an incredible job all year.  I also have to thank my parents (Di and John) and my sister Kennedi for their endless support.  God has blessed me in so many ways, but especially by giving me such a great team.”

Coughlin’s next race is this Saturday, August 13 at Michigan’s Auto City Speedway.  He’ll be back in his Pro Late Model as he looks to extend his JEGS/CRA All-Stars Tour points lead even further.